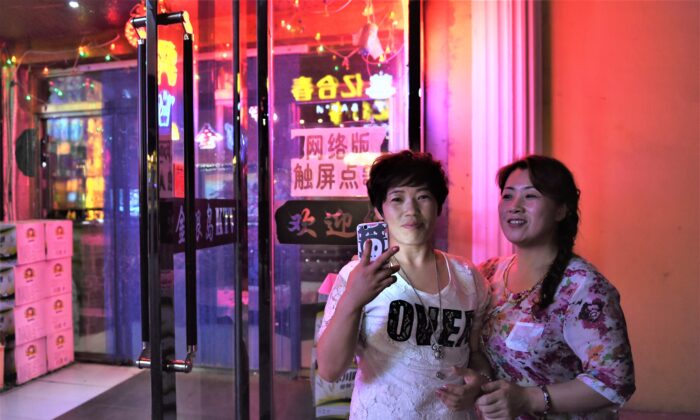 Two women outside a karaoke bar in Hunchun, in China’s northeast Jilin province, on June 24, 2015. (Greg Baker/AFP via Getty Images)

SHANGHAI—The Chinese Communist Party (CCP) will establish a blacklist of karaoke songs to ban those containing “illegal content” at karaoke venues across the country starting from Oct. 1, its Ministry of Culture and Tourism said on Tuesday.

Such content includes that which endangers “national unity” under the party’s totalitarian rule, sovereignty or territorial integrity, violates the atheistic party’s religious policies by propagating what it considers “cults or superstitions,” or which encourages illegal activities such as gambling and drugs, according to the ministry’s website.

Content providers to such karaoke venues will be responsible for auditing the songs, it said, adding that China has nearly 50,000 entertainment outlets with a basic music library of over 100,000 songs.

This could make it difficult for venue operators to identify illegal tracks.

The ministry said it encouraged content providers to supply what the party would consider “healthy and uplifting” music to these venues.

In recent months, authorities have punished individuals involved in livestreaming content to video platforms that the party deems “low taste.”

By Brenda Goh. The Epoch Times contributed to this article.