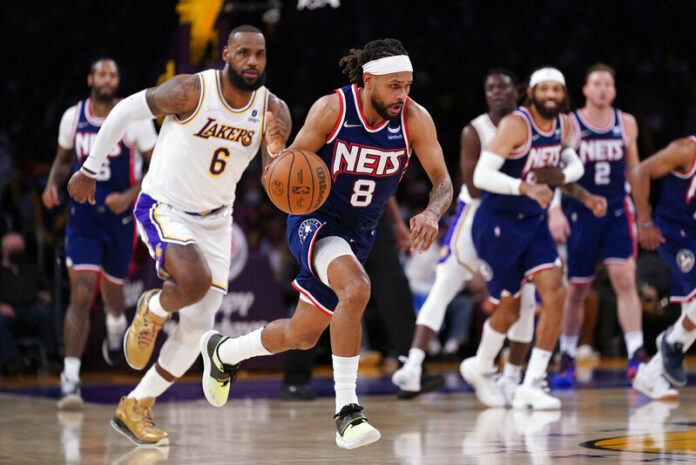 Harden had 36 points, 10 rebounds and 10 assists. The last helper was a lob that Claxton caught with two hands while soaring over James, who had just helped Los Angeles erase a 20-point deficit. Claxton posterized the 17-time All-Star, then made a free throw for a three-point play and a 118-115 lead.

Patty Mills added 34 points for the Nets, who had their past three games postponed because they did not have enough players to compete. They were still without Kevin Durant and Kyrie Irving, among others. Bruce Brown had 16 points and DeAndre’ Bembry had 15.

James scored 39 to pass Kobe Bryant for most career points on Christmas Day, but it was not enough to stop the Lakers’ losing streak from reaching five. Russell Westbrook had 13 points, 11 assists and 12 rebounds for his second career holiday triple-double, and Malik Monk chipped in 20 points.

James passed Bryant with the first of two free throws with 3:52 left in the first half of his 16th game on Christmas, tying Bryant’s record for most appearances. James has 422 points on the holiday to Bryant’s 395.

After Claxton’s alley-oop, Westbrook missed a dunk at the other end, and Harden knocked down four free throws to see out the win.

After falling behind early in the third quarter, the Nets reasserted themselves to close the period with a 102-82 lead thanks to strong shooting from multiple contributors. Harden paced Brooklyn with nine points, and the Nets knocked down 13 of 21 field goals while forcing the Lakers into another cold streak after struggling to make shots in the first quarter.

Harden is the seventh player to record a triple-double on Christmas. … Clayton finished with nine points and six rebounds. … Darren Collison had no points, one assist and two rebounds in 12 minutes in his first game after signing a 10-day contract with the Lakers. The 34-year-old, who was born in Rancho Cucamonga and starred at UCLA, had retired in 2019 after playing 10 seasons with New Orleans, Indiana, Dallas, the Clippers and Sacramento.

Nets: At the Clippers on Monday.

Lakers: At Houston on Tuesday.