Leading motoring journalist Mark Gallivan talks to Jens Sverdrup (pictured above), the chief commercial officer of Czinger, a Los Angeles-based startup that is trying to break the mould in the realm of hypercars with a brand new, hybrid high-performer that should become the world’s first 3D printed hypercar.

You could call it an epiphany moment. I’m talking to Jens Sverdrup, the chief commercial officer of Czinger, the Los Angeles startup automaker that broke ground this year. We are both on a video call – I’m in Europe and Sverdrup is on California’s west coast. After discussing the car, its unique production process and general industry disruption, the conversation turns to the global lockdown.

He’s a Norwegian and, pragmatically, turns his computer toward his window to show the view outside. A deserted beach under a low fog and the Pacific Ocean comes into view. “Usually you cannot see the boats because of the smog. There are some islands out there which are very close and it shocked me – I never knew there were islands out there. And this happened after one week of the lockdown. I can see the Santa Monica mountains and every tree – even the water is crystal clear,” he enthuses.

Czinger was founded by Kevin Czinger, the CEO of Divergent 3D, the Los Angeles industrial technology company backed by the Hong Kong billionaire, Li Ka-shing. It’s setting out to achieve several things: build a hypercar that offers retina detaching performance – 0-100kph in 1.9 seconds and 0-300kph in 15 seconds – while still being refined enough to drive to the shops and offer, under the right circumstances, zero emissions. The Cziner 21C houses two batteries of the highest discharge, located in the front sills and using a methanol fuel mixture, the new 21C can generate zero-emission flames taking CO2 out of the atmosphere. Czinger already has over 350 patents registered. 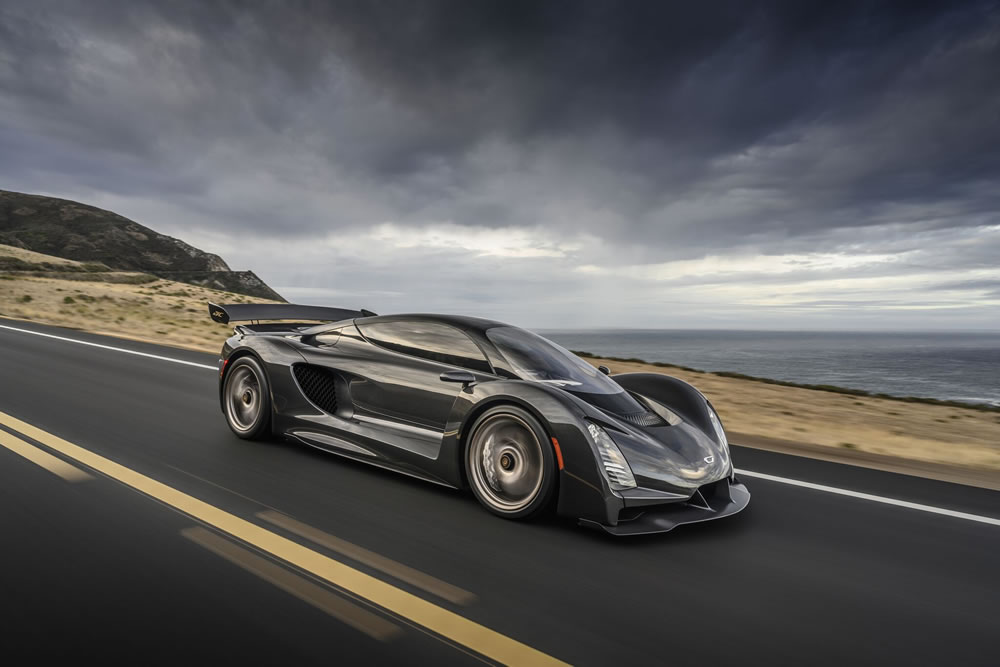 “The 21C is the halo product that would launch the Czinger brand. There is a much bigger story to tell and we are well into development of other vehicles too. There is a full lineup of vehicles to come,” says Sverdrup.

I ask Sverdrup, what is Czinger’s main USP? “It’s difficult as there are four pillars – innovative tech, dominating performance, iconic design and zero emissions. And within those lies our drivetrain and [Divergent’s] manufacturing techniques. The performance is the easy part,” says Sverdrup. “If you’re in the industry now it is so much harder to make a refined car than a car that has these performance numbers. I am way more impressed when you can have a car with this performance and you can drive around smoothly in the city centre.”

Czinger has launched two versions of its new hypercar. The 21C and the 21C lightweight. Deliveries of the first 25 cars will arrive in early 2021 followed by 65 homologated (road legal) road production cars in 2022. A total of 80 cars will be built.

The performance figures of the 21C are simply staggering. Utilising a twin-turbo V8 petrol hybrid electric engine with an electric motor assigned to each wheel, the 950hp increases to 1,250hp at 10,500rpm and achieves a one-to-one power to weight ratio. 0-100kph in 1.9 seconds breaks the sub two seconds barrier with 324bhp per litre from the 2.88-litre engine. 0-300kph takes 15 seconds from the 7-speed sequential transactional gearbox/hydraulic gearbox. 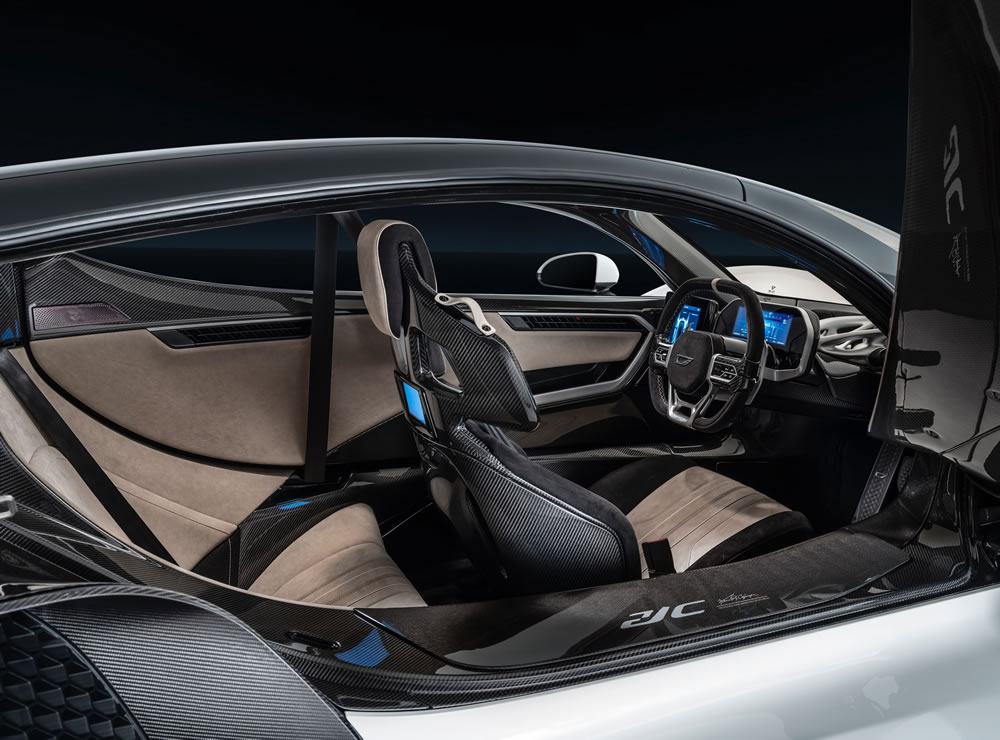 I ask about Czinger’s claimed performance figures and how accurate they are. “We have been driving this car since August on the race tracks collecting data with an added 40 per cent simulation,” Sverdrup is keen to stress Czinger’s credentials. “Our CTO was Koenigsegg for 12 years.”

The Czinger 21C’s design stretches the Gordon Murray mantra of putting the driver at the centre of the car like a Formula One racing car when he designed and engineered the McLaren F1. The Czinger’s seating is just for two people, with the driver sitting in front and the rear passenger directly behind in a formation that is more akin to a fighter aircraft. The benefits of this layout is a cocooned closed canopy that makes the 21C look more like a Le Mans LMP1 car than the traditional offerings served up by Bugatti and Aston Martin’s Valkyrie.

I ask Sverdrup if Czinger is setting out to rival Aston Martin. “The biggest issue with a new brand is to be compared with the others. Czinger has everything to gain by being compared with the establishment. Czinger is not a hypercar brand it is more of the higher end of supercar luxury car manufacturer. We have higher volume cars in development. We are finding other interesting niches. But we are not going down the McLaren high volume process.” Sverdrup clearly knows his market. “We will have over 20 dealers by the end of the year but the most important part is aftermarket. You need a dealer to take care of you.” Czinger is still planning media and customer events after the cancelled Geneva show. “The next events will be smaller – around 50-100 guests. I have been dealing with these customers for years. They are my friends.” 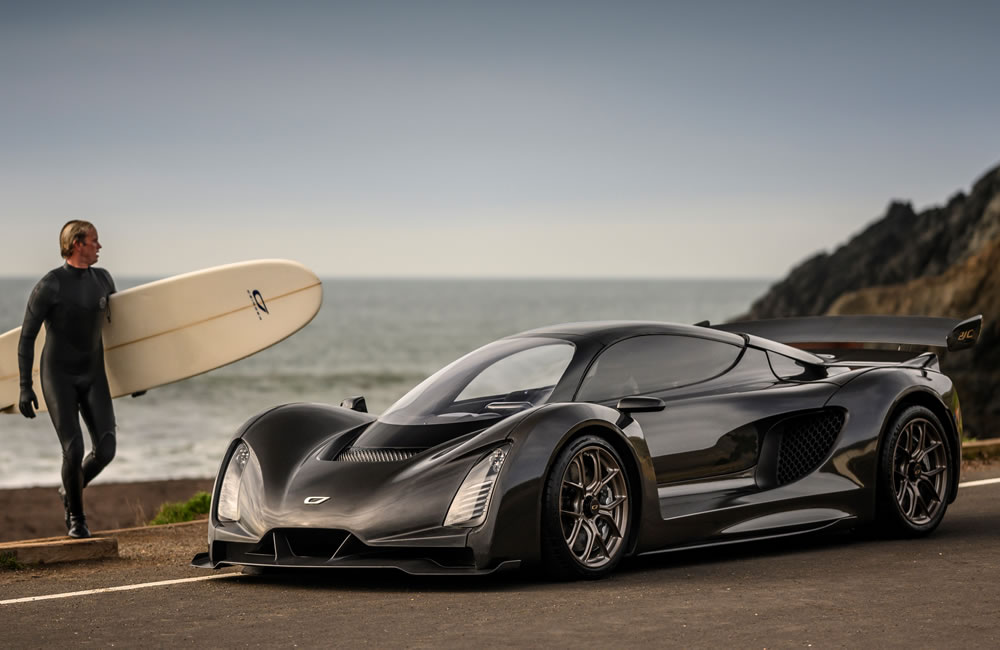 Equally of interest is the highly agile production process licensed to Czinger by its parent company Divergent 3D. It is one of the most disruptive, yet agile, manufacturing processes I have ever reported on. Each Czinger takes up to 4,000 hours production.

Sverdrup explains: “It’s a 1,000 hour paintjob. We are using 3-D printing, not to save time, and we don’t need to use 3-D printing, we just use it as it is the best. It offers an extreme amount of flexibility. We can have a new part engineered and made in a week as opposed to three or four months with carbon tooling. That is the advantage. Divergent’s technology can still have high production that’s still bespoke and only build on the order stock.

“You don’t need to have the traditional way with stamping and parts and three shifts working. You can set up smaller units and only produce what you sell. Czinger uses this for extreme performance and design flexibility without the high expense. The traditional way takes years and that doesn’t benefit the planet. What we have done in three years would have taken seven had we done it the traditional way.”

Back to that word: agility. It appears to be the Czinger goal. “I love the way we are doing things – if something doesn’t exist – let’s invent it. Let’s not be held back by what’s not available let’s make it ourselves. Agility is everything. We are forcing the automotive industry to change.” 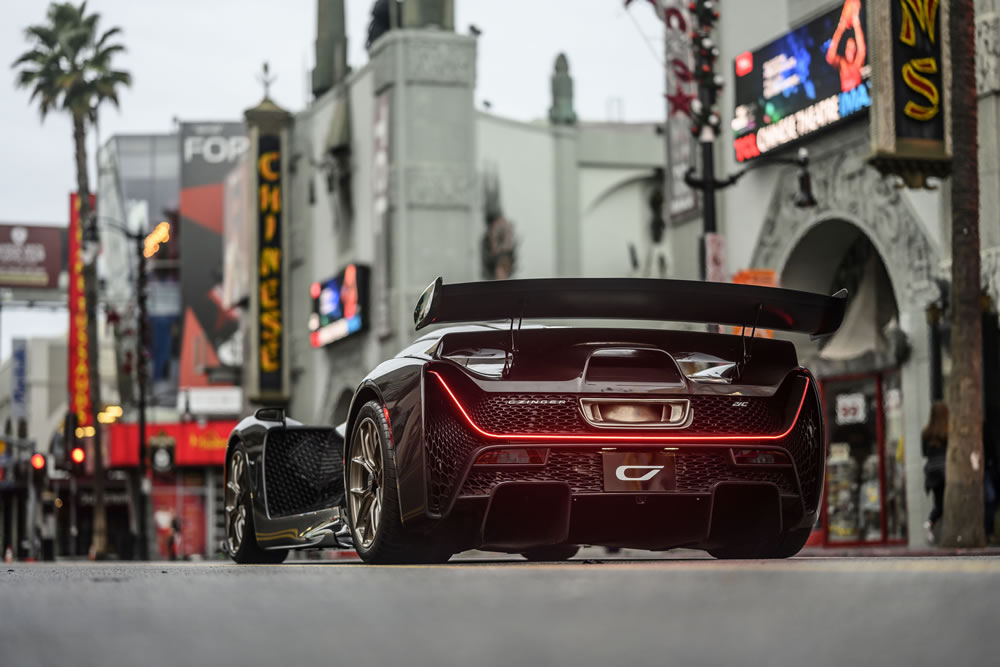 I leave the last word to Sverdrup. “Kevin (Czinger) was working with Tesla and Coda creating a big mega battery factory and saw the impact it had on the environment. Kevin is on a mission to save the planet, and it was a defining moment that he decided he didn’t believe in EVs and there had to be a better way of doing it. Taking less materials out of Mother Earth. Even our drivetrains are zero emissions with the right fuel – that [technology] is ready now and everyone could use it. It’s a lot cheaper than EV development. The infrastructure is there. There are petrol stations across the world. You can convert any car made in the last twenty years to a flex-fuel (petrol mixed with methanol) car. This technology is ready now and on the button,” explains Sverdrup expanding on the zero emissions message and the visible impact.

“You can see the signs of nature reclaiming and recovering and fighting back during the lockdown. There is no way that is going unnoticed. To have a clean, beautiful planet is good and, yes I am a hypercar guy and love racing, but what I also want is this pristine, cleaner air. All of a sudden the world is a paradise. And that fills me with hope.”