MANILA/HONG KONG — In his final state of the nation speech on Monday, Philippine President Rodrigo Duterte suggested that he is sticking to his conciliatory stance toward China.

The outgoing president expressed his intent to keep an equal distance from other countries, saying he will “continue to work with all nations and seek partnerships that work.” Critics think Duterte is afraid to get tough with China over the territorial dispute in the South China Sea while the Philippines remains dependent on China for economic assistance and COVID-19 vaccines.

For Duterte, whose term expires in June 2022, it was the sixth and final state of the nation speech. He stressed his balanced approach to different nations, saying, “Gone are the days when the Philippines decides and acts in the shadows of the great powers.”

Referring to the July 2016 ruling by an international tribunal in The Hague that denied China’s claim on territorial rights in the South China Sea, Duterte said it is “part of the international law and beyond compromise and beyond the reach of the passing governments to dilute or diminish or abandon.”

The international community has been critical of China’s expansive moves in the South China Sea even after the ruling. China has never accepted the decision, and even recently, its foreign ministry spokesman Zhao Lijian called the arbitration to be “illegal” and an “invalid waste of paper.” Still, in the speech, Duterte clearly indicated he does not want conflict with China.

“Do you want war against China?” he said. “Well, I’ll tell you, even on the coast beach of Palawan, before you can take off, the missile of China would be there in about 5 or 10 minutes.” 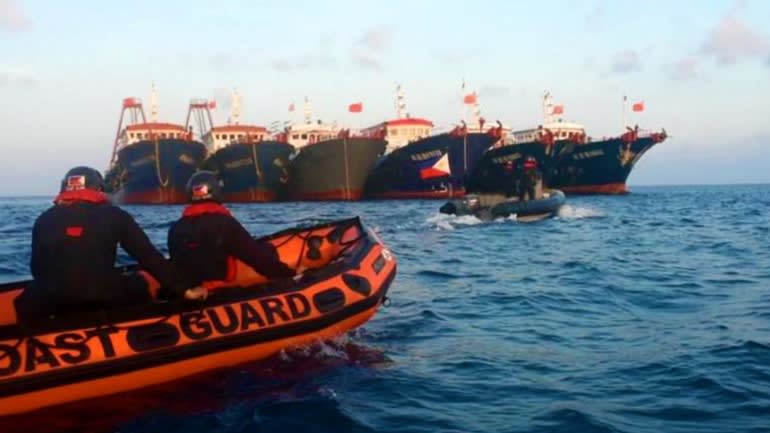 In a change of stance toward the international court’s ruling, he said, “There was really no arbitration at all.”

“We are not a competent and able enemy of the other side. So, what I did was, I was just being nice to them,” Duterte said.

The fact is, the Duterte administration has repeatedly made conciliatory statements to induce China to cooperate even as the territorial issue simmers.

According to the Philippine Statistics Authority, the country’s exports to China and Hong Kong represented a combined 29.3% of its total exports of $64 billion in 2020. The figure exceeds the 15.5% for Japan and 15.2% for the U.S. Philippine imports from China and Hong Kong in the same year represented 26.3% of the overall figure of $86 billion, compared with 7.7% for the U.S.

Over the five years since 2016, when Duterte was inaugurated, direct investment from China totaled $567 million, increasing 12-fold from the level in a six-year period from 2010, during the administration of his predecessor, former President Benigno “Noynoy” Aquino III.

“It is beyond dispute that our economic governance fundamentals were robust before COVID-19 hit us,” he said.

Duterte revealed “the first country I called for help was China” when the pandemic hit the Philippines.

“I told [Chinese] President Xi [Jinping], we have no vaccination program here because we do not have the vaccines,” he continued. “We have not been able to invent one. We might have a hard time. [Xi said] it is OK. We will send you. He sent us, donated about 1,500,000.”

China’s Sinovac Biotech now supplies about 60% of the Philippines’ vaccines.

On the other hand, Duterte indicated he intends to keep the county’s distance from the U.S., with which he has a military alliance.

“They say that if the attack is against the Philippines, they will defend. But they issued a statement that America does not meddle in conflicts, involving the boundaries of other nations,” Duterte said, expressing his dissatisfaction.

In February 2020, the Philippine government notified the U.S. of its intent to unilaterally bow out of the Visiting Forces Agreement, which forms the foundation for the alliance. The agreement specifies the legal status of U.S. military personnel in the country. The bilateral alliance would be threatened should this important agreement be abandoned.

VFA is believed to be an irreplaceable agreement for the Philippines, but Duterte did not make clear what he intends to do with it in his speech. Duterte is expected to meet with U.S. Defense Secretary Lloyd Austin during the latter’s upcoming visit. Analysts say Duterte may be using VFA as a bargaining chip in dealings with the U.S., which seeks to contain China and increase its presence in the Asia-Pacific region.

Critics are hitting back on Duterte’s defeatist stance toward China. Retired Supreme Court Justice Antonio Carpio refuted the president immediately after the three-hour speech, especially on the notion that confronting Beijing would lead to war over the South China Sea dispute. 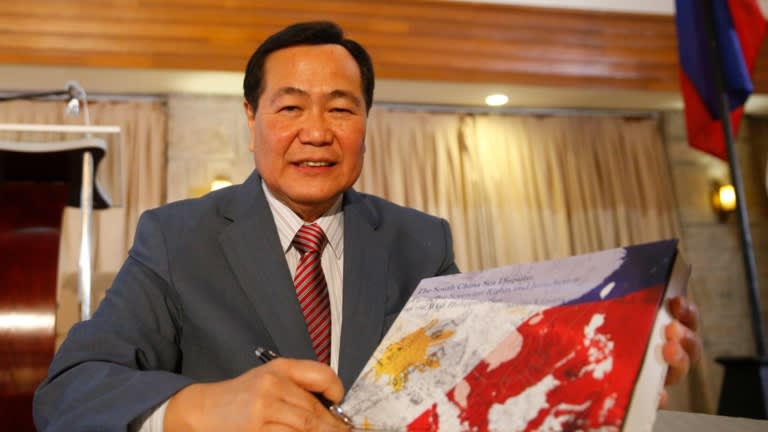 “President Duterte has been saying that from Day One, that to assert with arbitration is going to war with China,” Carpio said during an online media briefing sponsored by the Hong Kong Foreign Correspondents’ Club on Monday night. “We laugh at that because no one is talking of war in the South China Sea. That’s the reason why we went to The Hague, because war is not an option,” he said.

Duterte followed the Chinese script that the arbitration does not bind China as it was not present during the tribunal. However, China is a signatory of the international treaty and already ratified it in 2006. The former supreme court justice explained the legal logic that “when you ratify UNCLOS, you give your consent in advance to any future dispute under UNCLOS settlement mechanism.” The tribunal went on without China, but “China has only itself to blame, and it knows that.”

Carpio, who is a leading Duterte critic, points out that even China does not want war, as the Philippines is the only party in South China Sea squabble that has a mutual defense treaty with the U.S. Most recently — two days before the fifth anniversary of the arbitration — U.S. Secretary Anthony Blinken urged China to halt any “provocative behaviors” while reiterating that the mutual treaty covers any attack against the Philippines in the disputed area.

“The last thing China would want to do is to give the U.S. legal excuse to intervene in the South China Sea dispute,” Carpio said. China is “just intimidating” with their military and economic might, and that tactic is working “because states are being intimidated and leaders like Duterte are being intimidated. They’re falling into a trap [with] China.”

Ella Hermonio contributed to this report.