About 100 volunteers will be used in the trial and they will be given three different dosages, of 10, 50 and 100 micrograms, of the candidate vaccine, to determine which is most suitable, he said, adding that, if everything proceeds according to plan, mass production could start in the third quarter of next year. 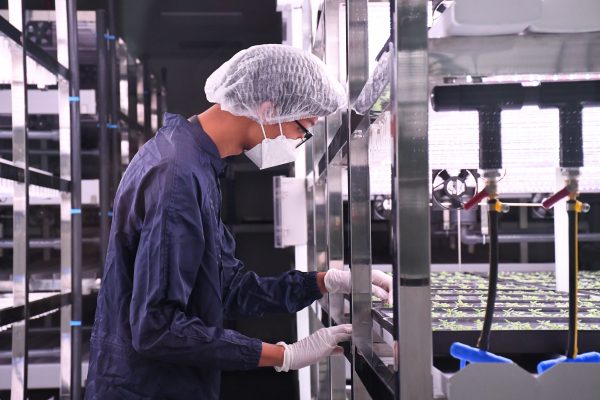 The factory was built with about 160 million baht, provided by the National Vaccine Institute, on the 11th floor of the Chulapat 14 building and has been approved by the Thai FDA. The factory will have the capacity to produce up to 5 million doses a month.

Mr. Anutin said that trials of the candidate vaccine on mice and monkeys show that it boosts immune response satisfactorily, adding that the Ministry of Public Health is to support this vaccine project with additional funding.

He also said that the protein subunit vaccine can be adapted to deal with different viral variants, similar to the anti-flu vaccine.

The subunit vaccine presents one or more antigens to the immune system, without introducing pathogen particles, whole or otherwise. Like the inactivated virus vaccines, such as the Chinese Sinovac and Sinopharm, the vaccine is dead.

In the case of the Thai protein subunit vaccine, a bacterium carrier with antigen inserted is transplanted into tobacco leaves, which can later be extracted for its protein for vaccine production.

The post Human trials of Thailand’s first COVID protein subunit vaccine to begin in September first appeared on Thai PBS World : The latest Thai news in English, News Headlines, World News and News Broadcasts in both Thai and English. We bring Thailand to the world.