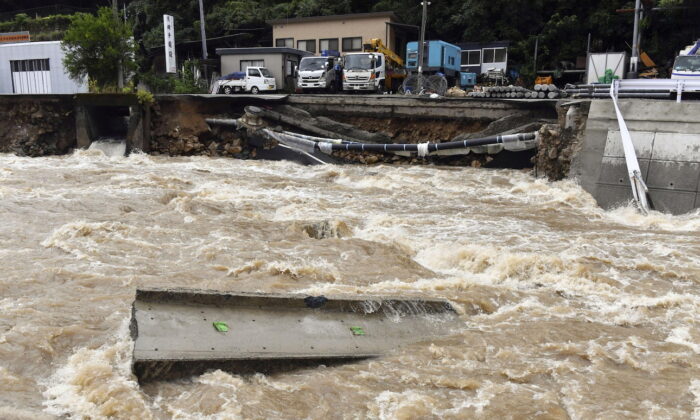 A road is damaged by the swollen Suzuhari river caused by a heavy rain in Hiroshima, western Japan, on Aug. 13, 2021. (Kyodo/via Reuters)

Japan on Friday issued high risk alerts in its southwestern regions, urging residents to prepare and evacuate. Highest risk alerts were issued in the western prefecture of Hiroshima, accompanied by warnings of imminent risk of floods and other disasters amid unprecedented rains.

The Japan Meteorological Agency issued the warning, urging residents to prepare and act early. The agency added in a statement that the rain front could stay over the country for about a week.

On Thursday, hundreds of thousands of residents of Nagasaki and other parts of Kyushu island in southwest Japan were asked to evacuate to avoid floods and the risk of landslides caused by torrential rain.

In the city of Unzen in Nagasaki prefecture, rain triggered a mudslide on Friday that hit two houses with four residents. One was presumed dead when found, while another was conscious and able to talk as rescue workers were digging to free them, according to the Fire and Disaster Management Agency. Two of the residents are still missing.

The Japan Meteorological Agency said nearly 500 millimeters (20 inches) of rain fell in parts of Nagasaki in the past 48 hours, exceeding the average for the month of August. More downpours were forecast.

Japanese Prime Minister Yoshihide Suga called a disaster management meeting and pledged to do the utmost for the rescue and relief operation and support for the affected residents.

His office set up a disaster control centre on Friday to handle potential disasters. “Torrential rains could continue in regions around western Japan,” Suga said.

“It is too late to evacuate after the special warning is announced,” said Ryuta Kurora, director of forecast division at the Japan Meteorological Agency. “To protect your own life and the life of your loved ones, without waiting for a special alert announcement, please follow the evacuation information already issued by your local municipality and ensure your safety.”