Fancy an 18-course gourmet meal five meters below sea level? Under in Norway is being hailed as the world’s most Instagrammable restaurant. This wonder at Lindesnes in Southern Norway is also the first underwater restaurant in Europe.

Half-sunken into the sea, the restaurant allows diners to watch the marine life through a 36- x 13-foot panoramic window. Step inside, and you can descend all the way to a depth of five metres without a diving suit. Just walk down the stairs…

Under is the world’s largest underwater restaurant

With thick concrete walls, the structure is built to withstand pressure and shock from the rugged sea conditions. Over time, the restaurant itself will become part of the seabed. You will get to watch all sorts of fish species swim by, depending on the time of year. 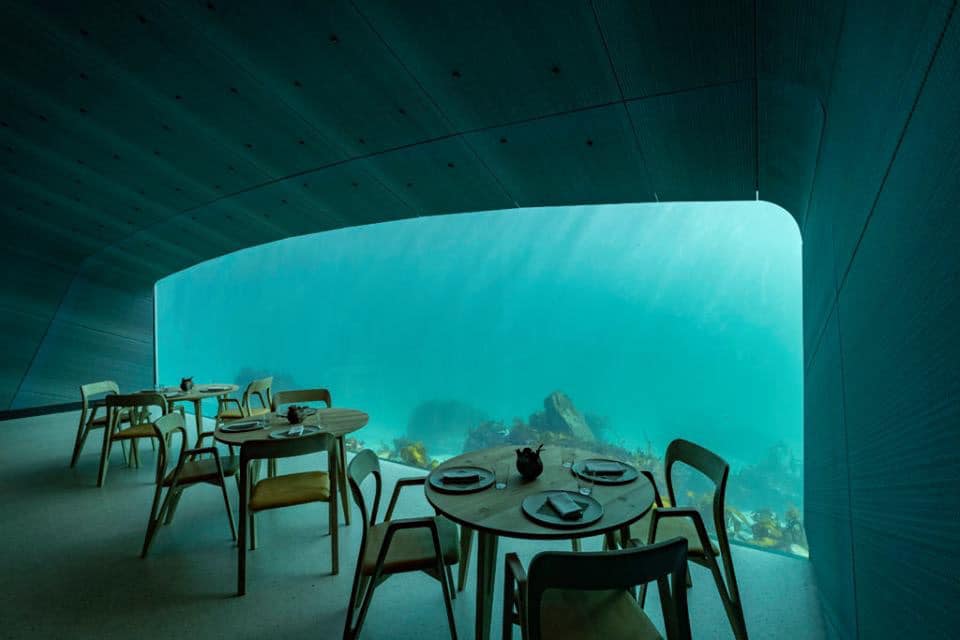 “The most exciting experience will be visiting the restaurant during rough weather,” the restaurant’s architect told Forbes. “It will be fantastic to see the sea surface broken up by the big waves and the rain, making for a very dramatic view.”

And it’s getting ‘wave’ (sorry!) reviews

Under recently earned a spot on Time Magazine’s World’s Greatest Places 2019 list. Critics are raving about it, and the waiting list for tables here is pretty insane. You can expect to wait six months for a table.

The cuisine is – of course – seafood

Each guest dines on the 18-course seafood tasting menu. It takes three and a half to four hours to “fully escape|” into their Immersion menu, so sit back and relax. Chefs create one fixed menu for the entire restaurant. They “believe this is the best way for us to showcase each season with its unique produce, and where we are located in this remote corner of the world.” Dishes make the best use of seafood just outside the restaurant’s doors, while you also have the option of tasting seabirds and wild sheep that have been grazing nearby. This is an underwater restaurant that’s an unforgettable experience, that’s for sure.