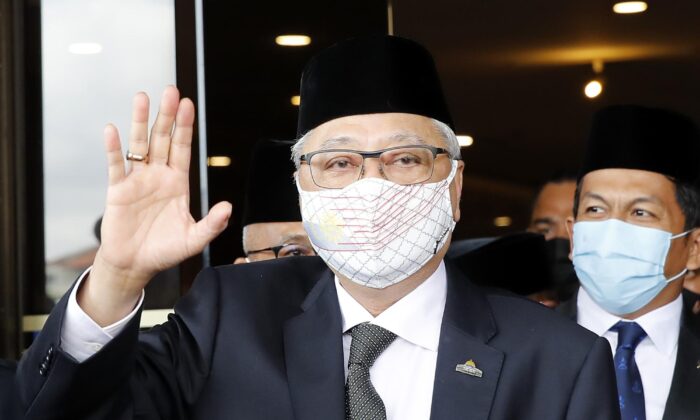 Former Deputy Prime Minister Ismail Sabri Yaakob waves to media as he leave after meeting with the King at national palace in Kuala Lumpur, Malaysia on Aug. 19, 2021. (FL Wong/AP Photo)

Malaysia’s king on Friday appointed the former deputy prime minister to Muhyiddin Yassin, who resigned after less than 18 months in office, as the country’s new leader.

Ahmad Shah said the 61-year-old politician will be sworn in as Malaysia’s ninth prime minister on Aug. 21.

The monarch said in a statement they hope the new government will unite in tackling the country’s worsening CCP virus pandemic while also urging lawmakers to set aside their political differences.

“His Majesty expressed the hope that with the appointment of the new prime minister, the political crisis can end immediately and all lawmakers can unite to put aside political agendas,” the royal palace said.

“The government should continue efforts to fight the COVID-19 pandemic immediately for the benefit and safety of the people and the country’s wellbeing, which are greatly affected by this crisis and the pandemic threat,” it added.

The announcement came after the monarch met state Malay rulers who advised him on the appointment. The king’s role is largely ceremonial in Malaysia, but he appoints the person he believes has majority support in Parliament as prime minister.

Yaakob was the deputy leader of Yassin, who stepped down earlier this week after losing his parliamentary majority due to political turmoil in his coalition.

The king’s appointment of the veteran politician essentially restores the Yassin alliance and brings back the rule of the United Malays National Organization (UMNO), which was voted out during the Malaysian general election in 2018 over a multibillion-dollar financial scandal.

Malaysia’s political party, UMNO, which is also referred to as the “Grand Old Party,” dominated politics in the Southeast Asian nation since its independence from Britain in 1957 until the party’s defeat in 2018.

The Associated Press contributed to this report.