People rushed back to shopping malls for the first day of reopening on May 17, but traffic has been lighter than some had hoped for. (Photo by Apichit Jinakul)

Despite the easing of stringent lockdown measures, the 3.6-trillion-baht retail industry remains far from a full recovery, and nearly all business operators in the sector are struggling to regain business.

Some 10-30% of in-mall businesses have restarted since shopping malls were allowed to reopen on May 17 after being ordered closed on March 22 as part of state efforts to prevent the spread of the coronavirus.

The number of customers at each retail store is lower than hoped for and down sharply from the one person per five square metres seen before the crisis.

A majority of shoppers are still concerned about health and safety, though retailers have exerted optimum effort to offer innovative and proactive measures to curb the contagion.

The government’s planning unit, the National Economic and Social Development Council, recently predicted Thailand would lose up to 14.4 million jobs in the second and third quarters because of the coronavirus outbreak and drought effects.

Of the total, some 8.4 million workers are estimated to be at risk of job loss, 2.5 million of whom are in the tourism sector (excluding retail and wholesale trading), 1.5 million in the industrial sector and 4.4 million in other parts of the service sector.

The tourism sector employs an estimated 3.9 million people, while the industrial sector, diminished by the trade war, has about 5.9 million workers.

Workers in other parts of the service sector, such as schools or places with large groups of people such as fresh markets, sports stadiums and shopping malls, are estimated to number 10.3 million. 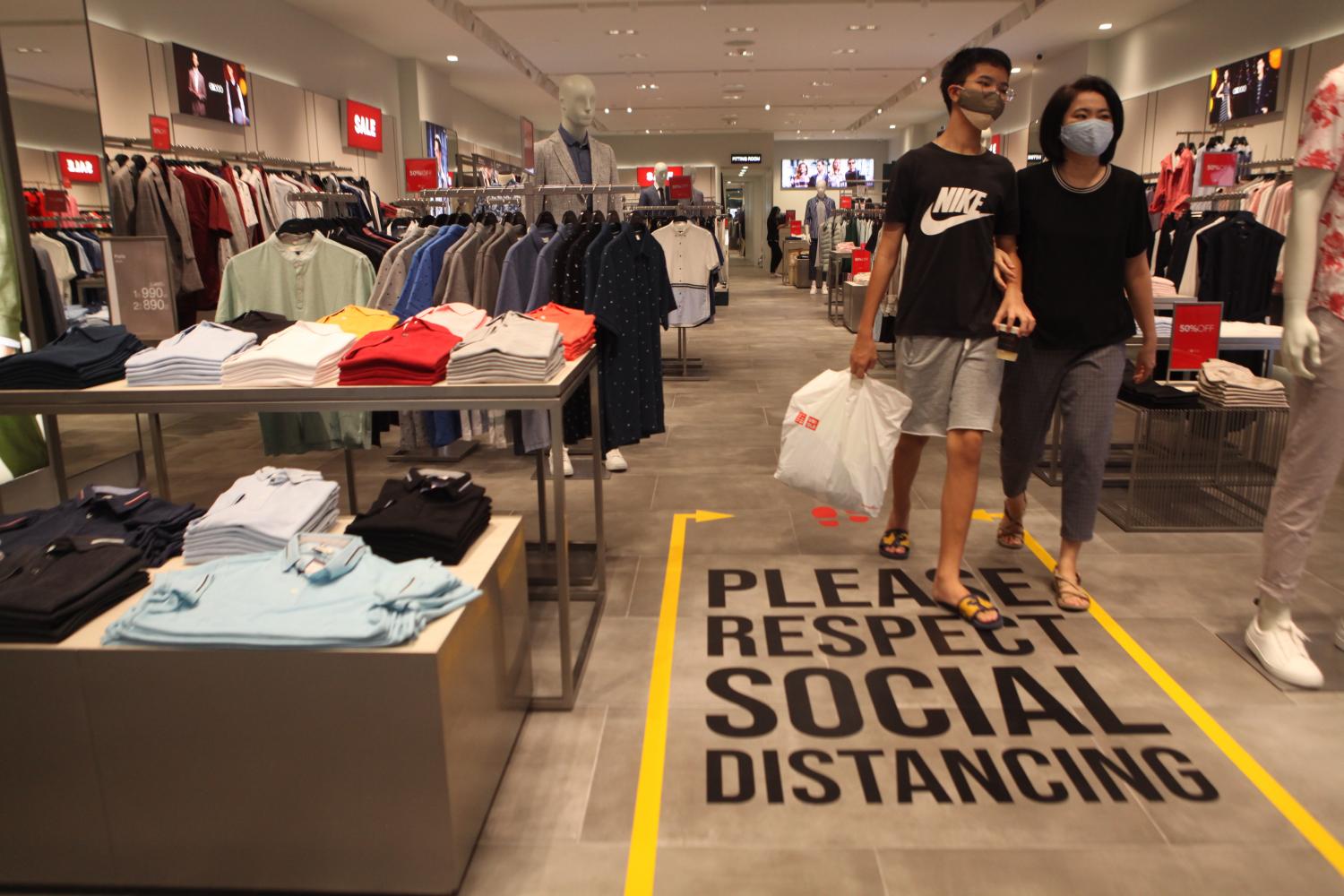 “I don’t think that retailers and related businesses will see a light at the end of the tunnel any time soon,” said Kitti Silipullop, an associate professor in the marketing department at Thammasat Business School.

He cited food as a key magnet drawing visitors to shopping complexes. Less than half of customers have resumed their normal shopping habits because social distancing requirements have diminished the dining atmosphere at restaurants.

“Businesses are unlikely to recover easily because the operators have to spend extra on safety measures while available seats have declined by half,” Mr Kitti said. “In addition, two months of mall closures have made people become more familiar not only with ordering food via delivery channels, but also shopping for fashion items online.”

He said retailers will have to work harder to draw groups of shoppers to their complexes using new and innovative events.

Nattakit Tangpoonsinthana, executive vice-president for marketing at Central Pattana Plc, said 50-70% of customers have returned to Central shopping complexes, except at those in tourist destinations.

“I am a bit surprised that the spending power of people in Bangkok has recovered faster than expected,” Mr Nattakit said. “But I am still worried about the food business, which has yet to improve much due to seat limitation. We hope the food business will see an improvement after the government relaxes restrictions on the number of customers at restaurants because Thai people are social and will go out to eat.”

As part of efforts to stimulate consumer spending, Central launched a campaign offering free space for farmers, SME operators, entrepreneurs and the unemployed to sell products at all branches of Central shopping centres until July 31.

Veena Arunyakasem, a business consultant at Tira International Consulting Co, said she thinks that about half of customers have baulked at shopping because of safety concerns and that online shopping will continue to flourish.

“The Covid-19 outbreak is estimated to cause about 500 million people across the world to become poorer, 300 million of whom are in Asia-Pacific,” Mrs Veena said. “But there is nothing to be panicked about as, from many crises in the past, those crises can’t do anything to middle-income people. This group of people still continues to spend if retailers offer products that fit their lifestyle.”

The online channel will remain important for retailers, but the buying process must be made easy like on Amazon, she said. 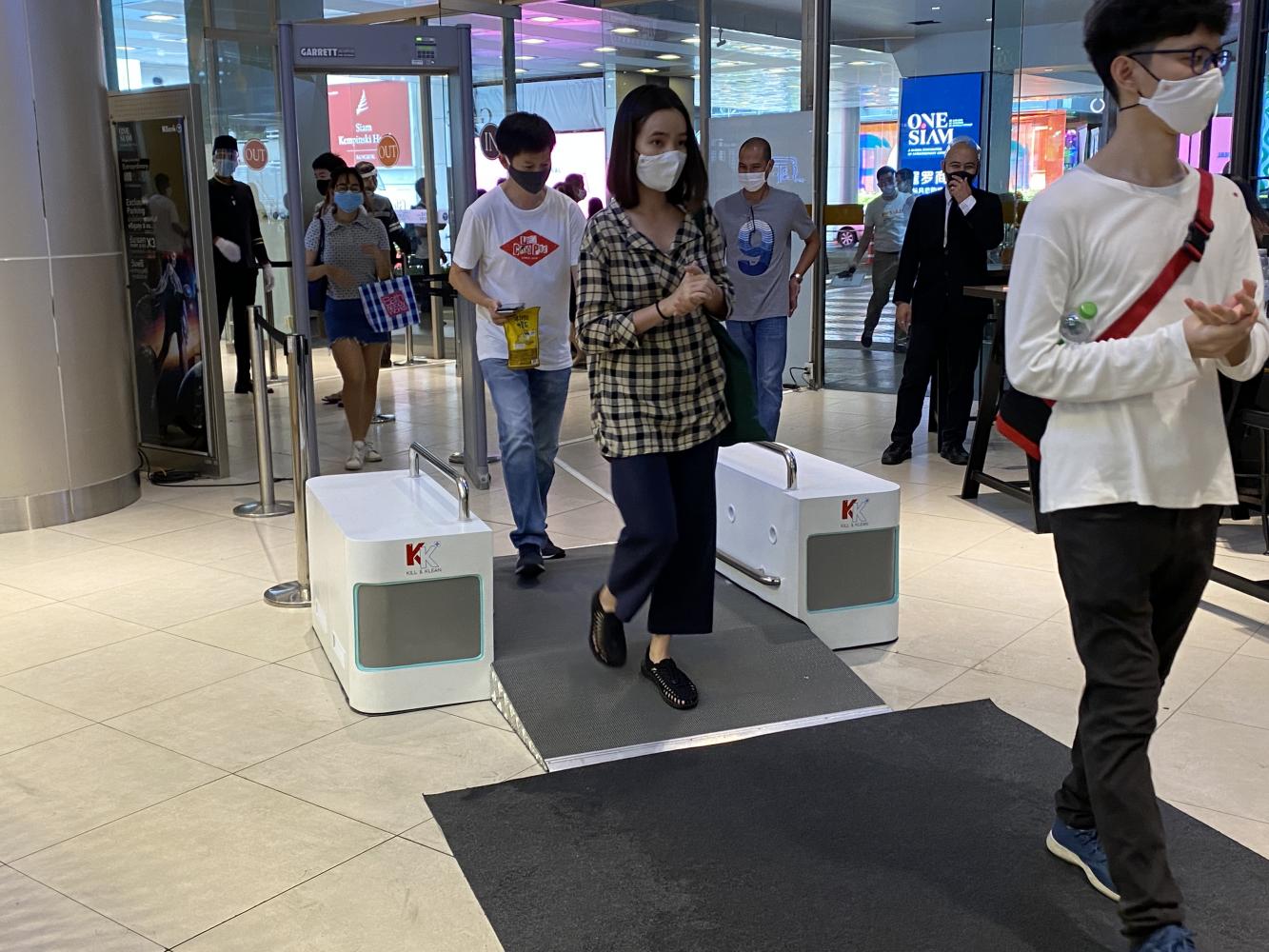 Visitors are disinfected at a mall entrance. Many shoppers remain concerned about health and safety. BANGKOK POST

The percentage of traffic returning to his restaurants is low despite the government’s easing of lockdown and protective measures.

“Our sales have improved by 10-15% but are still 50% below the level we enjoyed before the Covid-19 outbreak,” Mr Salhani said. “At present, rental fees are still going to be an issue until we see business get better. Mall operators have to become more flexible, and it has to be a win-win situation.”

At this time, Mudman has to reinvent itself to handle a possibly resurgent epidemic.

The company will watch and see if Thailand continues to implement controls. For any new investment projects, Mr Salhani said the company prefers to take time to adapt its concept to the new norms.

“So far we must say Thai people have been very disciplined and follow the rules,” he said. “Eventually we believe that the business will slowly improve, but from April to July business is likely to see rising challenges from tighter cash flow and employees. However, I believe that as of August a light will be seen at the end of the tunnel, but we need to proceed with caution.”

Mr Salhani expects business to begin improving in the fourth quarter with an 80% recovery by the first quarter of next year. But he remains concerned about a looming economic recession in the EU and the US.

“This could affect business in Asean,” he said. “So I recommend everyone to keep monitoring the situation not only in Thailand but all over the world because whether we like it or not, we are now connected more than ever.” 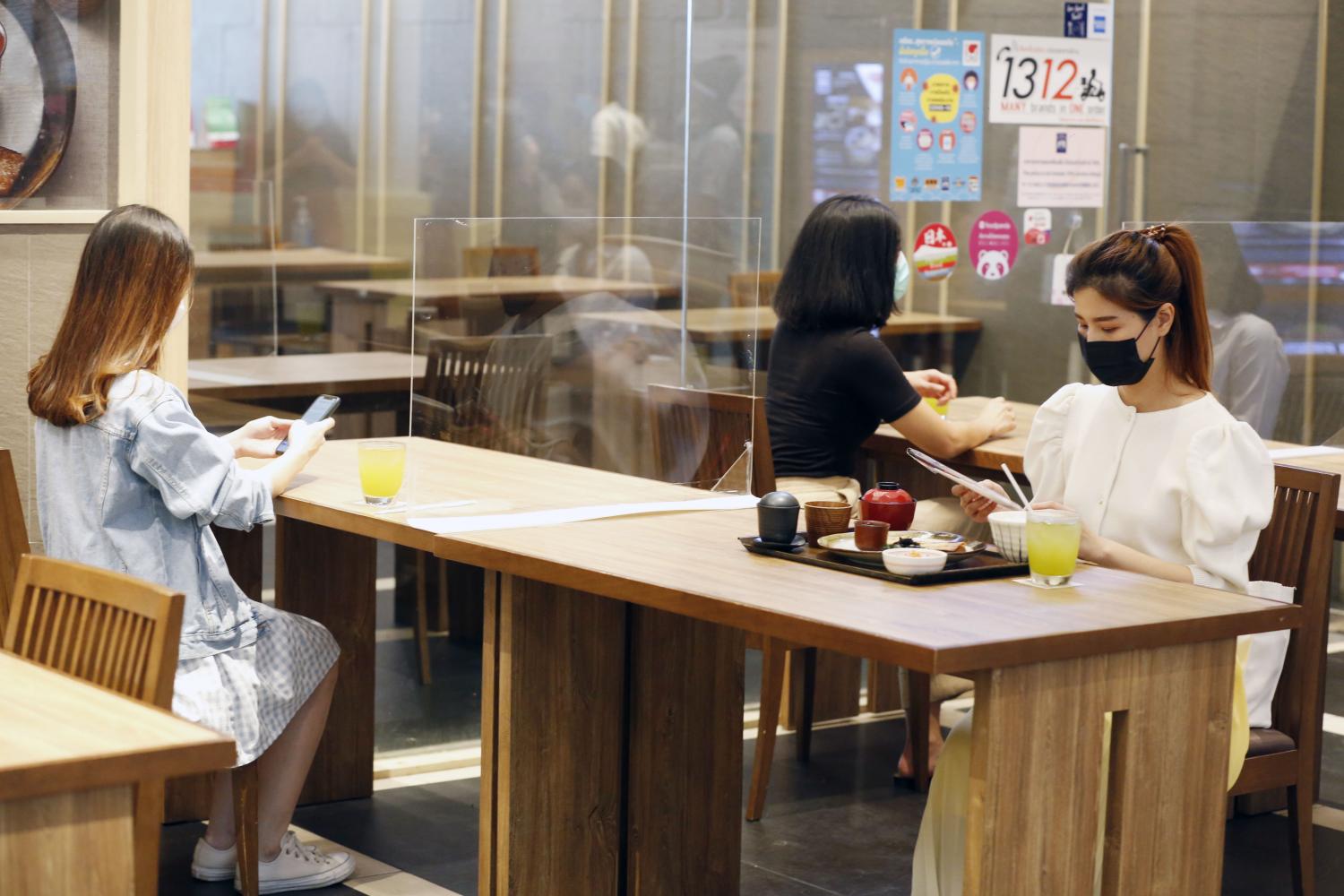 Pimsiri Thongrompo, marketing director of SF Corporation Plc, the operator of SF Cinema, said that after cinemas were allowed to reopen earlier this month, her theatres have yet to see a clear response from customers.

Ms Pimsiri said moviegoers normally come on weekday evenings, so the curfew led many to stay away.

“Closing our cinemas for 75 days was the most difficult move for us,” she said. “Reopening our cinemas with limitations will be even harder because the number of seats we can sell has to decrease to 25% of capacity to meet social distancing requirements. We still have fixed costs for human resources, services and rental fees, totalling about 100 million baht per month. Moreover, we were informed that we could reopen only a few days in advance, which is not enough time to promote movies.”

The company has reopened all SF cinemas across the country except in Phuket, totalling 400 screens. The Phuket cinema is undergoing renovation.

“The number of showtimes per day has dropped to three,” Ms Pimsiri said. “We expect the local cinema business to recover faster than other business sectors because movies are considered the cheapest out-of-home entertainment.”

SF has seven movies ready for release and is scheduled to show big blockbusters from the middle of June into July. 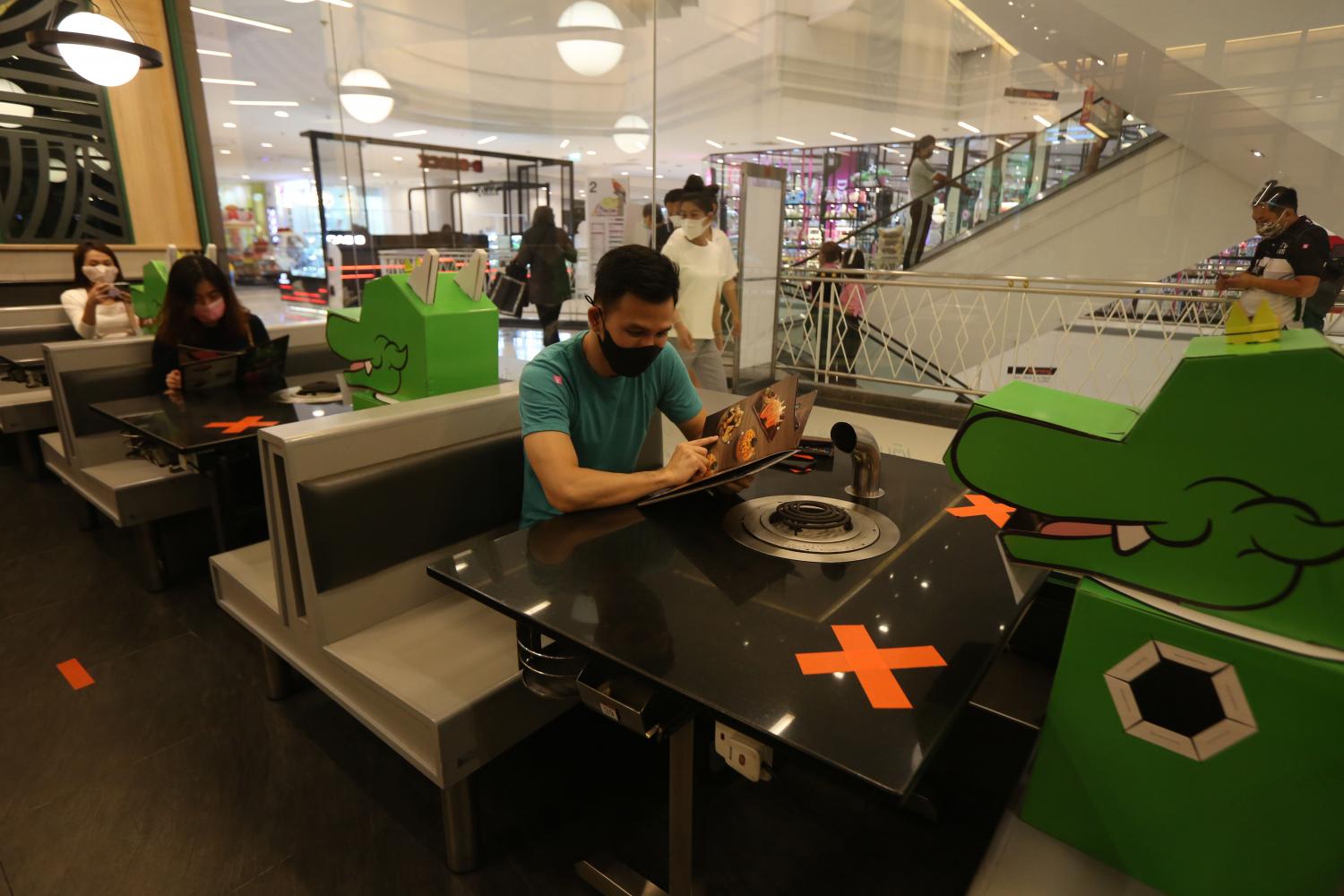 Kridchanok Patamasatayasonthi, managing director of Index Living Mall Co, said that the overall furniture business is expected to contract by as much as 30% this year.

“It’s difficult to forecast the prospects of the domestic furniture business because of the coronavirus pandemic,” Mrs Kridchanok said. “At this stage, we are adjusting our strategy, shifting focus to increasing efficiency at existing stores instead of opening new stores. Moreover, the number of new products to be launched this year will be slashed by 50%.”