There’s a problem with the Bentley Continental GT Convertible. In Scotland. Scottish weather, even in the height of summer, rarely provides convertible moments. That means that you drive the vast majority of the time with the hood up. And therein lies the next problem with the GTC – wind. Scotland has wind. Often a lot of wind. Here the Bentley Continental GTC shares an affinity with Scotland as it seems to have challenges with wind too. When you get up to a certain speed, with the hood up, the wind can sometimes howl through the car. The noise was noticeable enough that when it first happened, I got terribly concerned that I was merrily speeding along and hadn’t closed the driver’s door properly and that it may suddenly spring open and be ripped off halfway down the motorway after hitting the crash barrier.

Of course, it’s impossible not to close the door properly on a Bentley as the doors close for you. Pull the door nearly closed, but not quite, and the Bentley smoothly sucks the door firmly into place. They also stop exactly where you want them to stop when you open them. They are precision doors. Unlike other cars where you push open the door and it may fly outwards and you have to grab it quickly before it crashes into the side of the car next to you, that doesn’t happen with a Bentley door. For if you push it an inch, it moves only an inch, pull it open a foot and it opens only a foot. These are two of the small details that make a Bentley a Bentley. The attention to detail is extraordinary. 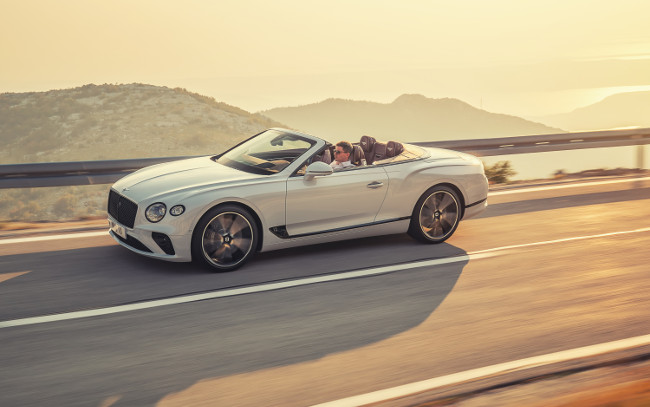 The wind issue will be the last and only negative comment that I will make about the Bentley Continental GTC. For if I was asked to describe the Bentley Continental GTC in one word, it would be ‘stunning’. This is a simply stunning vehicle. The latest evolution of the Continental GT sees some design changes which contemporise and refresh a car which was first launched back in 2003, the first release by the luxury car marque under its Volkswagen AG ownership. It was a pivotal moment in Bentley’s more recent history, the Continental GT seeing Bentley finally break free from the design shackles of its association with Rolls-Royce which saw it for a number of years lose its independent style and historical sportiness, becoming merely a Rolls-Royce badged as Bentley.

The most noticeable design differences in the latest GT versus older models is to the front and rear. The new grill at the front is stylishly imposing, big, bold, but beautiful. The rear has been re-modelled, giving oval shaped ruby break lights and a sharper boot shape. The whole car is sleek and curvaceous, but at the same time, looks slightly more muscly and toned than its previous incarnation. 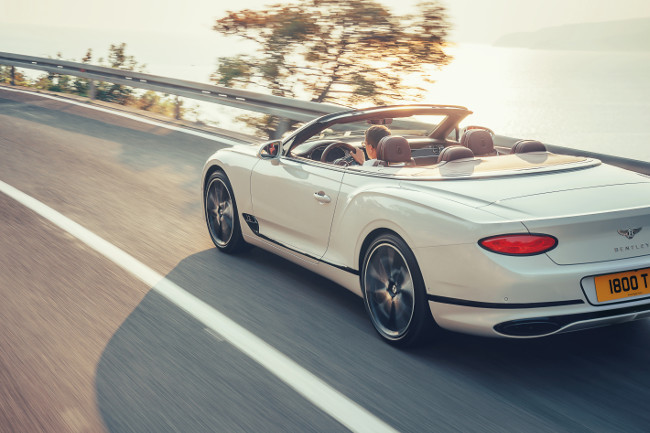 Stepping inside is to enter an exquisite world. The dashboard is like that of a luxury fighter jet. Like something that should be more at home in a James Bond Aston Martin, the video screen display in the centre console flips at the touch of a button to be replaced with three analogue old world circular dials – a compass, a chronometer and an outside temperate gauge. Perhaps a slightly gimmicky idea, but the gauges do look good, although I suspect few Continental GT owners navigate by way of a compass, especially when there is a high-tech satellite navigation system that projects your directions onto the front windscreen immediately over the top of the steering wheel.

The leather seats envelop you with softness and comfort. My wife and I many years ago stayed at friend’s house and had one of the best ever night’s sleep. The bed was so comfortable, it was like sleeping on a cloud. The next morning, our host revealed that it was the result of a ‘mattress topper’ and we subsequently purchased one and have used one on our bed ever since. Slipping into the driving seat of the Bentley is like driving on a seat which has a permanent mattress topper. It is a driving comfort like I have never experienced before. If you’re feeling stressed, switch on the massage setting. 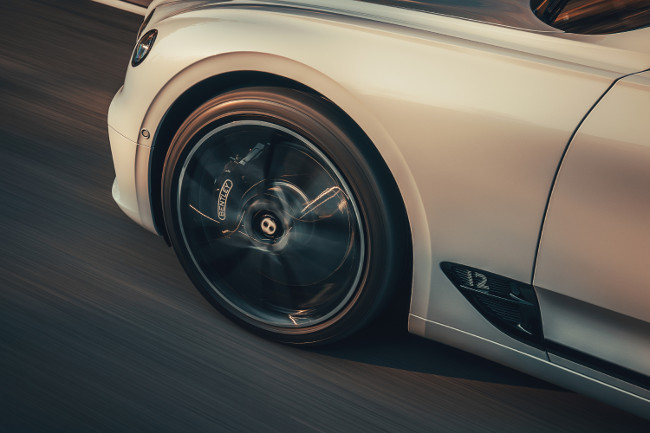 The Bentley Continental GT is also a car that comes with a built-in butler. When you close the door, a chrome device offers up your seatbelt, so that you don’t have to stretch back to get it. It’s as if you’re being offered up a glass of champagne on a silver tray. When you open the door, the seat moves back to provide more space and comfort for you to step out, as if the maitre d’ has just arrived and pulled back your chair as you leave the table of your Michelin starred restaurant.

Air comes from every direction in the Bentley to make sure you are cocooned in the perfect temperature controlled environment. There are even hot air blowers on the headrests so that you can warm the back of your neck when you’re driving with the hood down. You can select your choice or interior lighting colour for when it gets dark to suit your mood. The leather is beautiful, the wood veneer magnificent. Built by hand, the Continental GT provides a level of customisation that means that if you order a GT from new, you can craft a combination of interior and exterior styles that means there will likely not be another version like it. 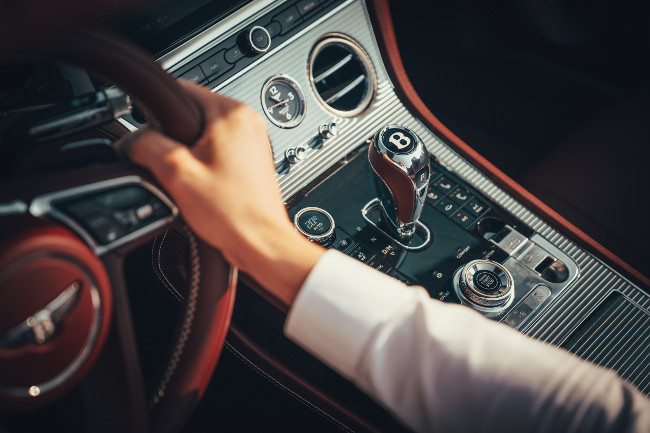 Switch on the ignition and the car starts with a throaty roar. Get out of the city and away from the speed bumps and the car comes alive. It accelerates like a bat out of hell. But unlike accelerating in the likes of a Lamborghini, when you feel the sensation of being thrown back in your seat, you only realise the Bentley’s acceleration when you look in the rear view mirror and realise that you have left the car behind for dust. Like everything with Bentley, it’s a refined acceleration. The first GT models back in 2003 featured a single W12 engine model, but the second generation version, released in 2010, also introduced a 4.0 litre V8 engine.

A number of vehicles have been launched as additions to the range over the years. This has included in 2017, an updated Continental Supersports which produces 700bhp (710 PS) making it the fastest road-going Bentley ever produced. My GTC has a 6 litre twin turbocharged W12 TSI engine, with 626bhp, powering the car from 0-60mph in 3.6 seconds. A top speed of 207mph is achievable. It has an 8-speed dual clutch transmission providing for smooth, fast and efficient gear changes. It has four different driving modes selected from the centre console. The Bentley mode, the default option, combines a blend of the Sport and Comfort modes. A Custom mode allows you to configure your own settings. 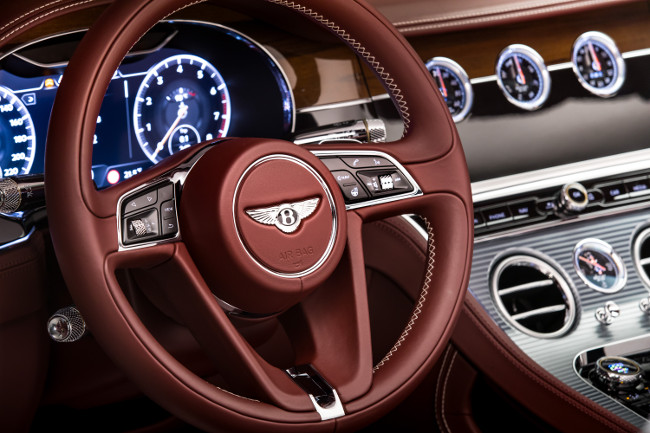 Bentley have heralded the GT as the most advanced Bentley model ever built. With its all-wheel drive, this includes the 48V Active Roll Control system which senses road conditions and changes the car’s movement instantaneously to optimise handling and ensure a smooth ride. With the engine, variable displacement technology allows one entire bank of cylinders to disengage at gentle throttle, reducing the number in operation to six and optimising fuel consumption accordingly, without the driver even noticing. The moment the throttle opens wider, the engine reverts to the power of all 12 cylinders. The Bentley Continental GTC is both an intelligent and powerful car.

Put the hood down and the car is a head-turning delight. You can drop the hood in 19 seconds, the fastest of any convertible available and it can be done at speeds of up to 30mph, enabling a swift return to being covered when caught out under a Scottish rain shower. 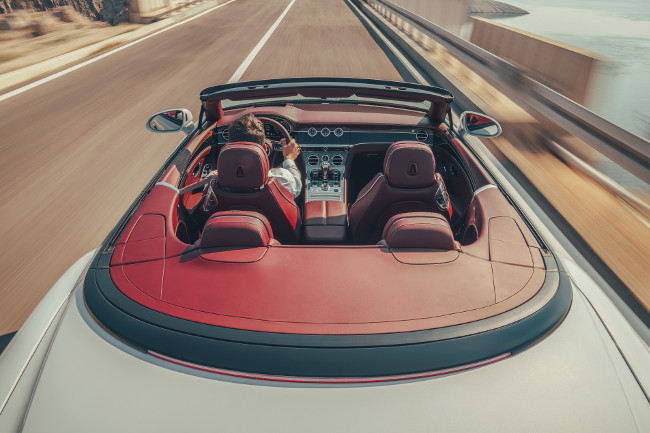 The Bentley Continental GT starts at £159,000 and you can add around another £20,000 to the purchase costs for the convertible, before you start layering on the vast array of additional and personalised specifications available. In terms of competitors, you could argue it is any of the luxury 4 seater convertibles from the Mercedes S Class AMG convertible to the BMW 8 Series convertible. But to get a car of the same status & style, you’ve really got to move to rivals such as the Aston Martin DB11 Volante or Ferrari Portofino, similarly matched price wise or the minutely cheaper, Maserati GranCabrio. You would need to add another £100,000 to acquire the Rolls-Royce Wraith convertible.

At launch in 2003, this luxurious grand tourer re-affirmed Bentley’s position as the leader in combining beauty, craftsmanship and power, the hallmarks of Bentley vehicles since the brand’s birth 100 years ago. Sixteen years later, the latest GTC is no exception – a blend of old-world glamour and sophistication with contemporary design and elegant power and speed.

Thanks to the team at Bentley Motors and Gavin Paterson at Bentley Glasgow for supply of the Bentley Continental GTC.

All images used in this article were supplied by bentleymedia.com.