“Sputnik V is safe!”; “Putin is just ‘playing along’ with the COVID narrative until the petrodollar collapses!”; “Russia is the last bastion of freedom!”

Alternative media has created an alternative reality about Russia.

The Kremlin has embraced all the same soul-raping “public health measures” currently terrorizing the Western world—and people are either in denial or making excuses. 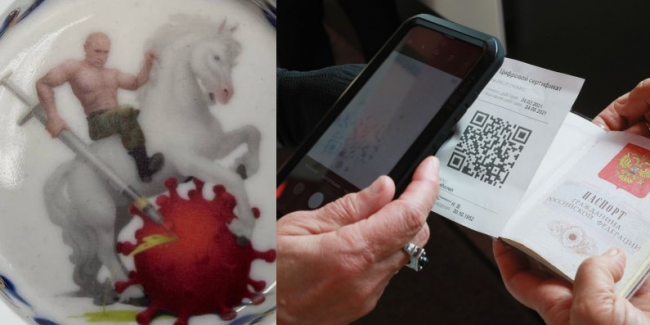 “There is no compulsory vaccination in Russia!”

All 85 federal subjects of the Russian Federation now have vaccine mandates, as well as rules requiring digital “health” certificates for entry to certain businesses, venues, and public institutions. Many regions are denying routine medical care to those without QR codes.

At the federal level, the Kremlin has voiced support for “any measures” that “encourage” Russians to get jabbed—while insisting vaccination remains completely voluntary.

A sample of regional flavors of “voluntary” vaccination in Russia:

Probably you read somewhere that Vladimir Putin outlawed compulsory vaccination as part of his master plan to destroy the fractional reserve banking system and bring peace and harmony to the world. Someone lied to you. Sorry about that.

Does the Kremlin have access to a time-bending wormhole? Because we keep reading boastful claims about the non-existent results of Sputnik V’s “long-term” (ha-ha) safety and efficacy trials—which are scheduled to end on December 31, 2022.

Like other COVID vaccines, Sputnik V has zoomed through clinical trials, with an “interim” report consisting of six months’ worth of data used as proof of its unassailable long-term safety and efficacy. It didn’t help that this already limited dataset was plagued by controversy (as well as an alarming lack of transparency). 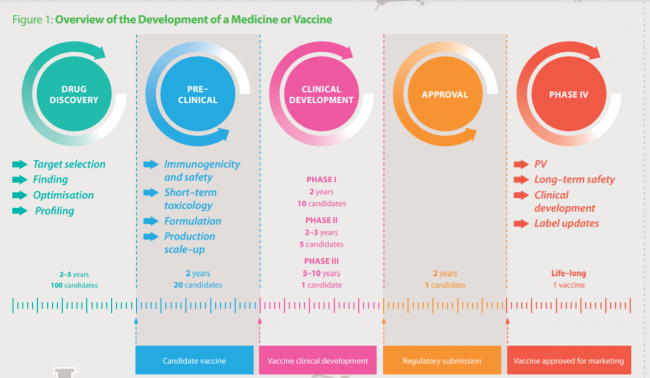 Sputnik V: zooming past all the unnecessary red tape

Alexander Redko, chairman of the St. Petersburg Professional Association of Medical Workers, noted in July that declaring Sputnik V “safe” without even waiting for ludicrous-speed clinical trials to end is about as scientific as reading tarot cards. Is he wrong? The Russian government clearly thinks so.

In December 2020, Russia’s health ministry announced it was prematurely ending enrollment for Sputnik V trials, arguing that it would be unethical to administer placebo shots when a proven, life-saving vaccine was already available to the public.

“Everything has now been proven, while the pandemic is ongoing,” Alexander Gintsburg, director of the Gamaleya Center—which developed Sputnik V—explained, just four months after Phase III trials had begun.

Science-deniers claim it’s irresponsible to coerce tens of millions of people to get injected with an untested drug, but what these conspiracy theorists don’t understand is that any long-term issues would have become apparent within four months.

Furthermore, Russia has a robust and transparent system in place for flagging side effects.

The Russian government does not have a VAERS-like database for reporting and monitoring suspected adverse reactions, and doctors who question the vaccine’s safety or efficacy are being threatened with exorbitant fines and prison time.

“The fact is that nothing is registered in Russia at all. Therefore, it is very difficult to understand how many serious complications there are. There are many cases, and we can say that they are related to the vaccine. There is a lot to say. Or you can stick your head in the sand and say that there is nothing at all,” Pavel Vorobyov, Chairman of the Moscow Scientific Society of Physicians, said in a recent interview, making him an anti-science hate speech criminal in the eyes of the Russian government.

Argentina’s health ministry is similarly guilty of High Crimes Against Sputnik V. In October, the South American state revealed that Russia’s flagship vaccine was the nation’s leader when it came to causing adverse reactions, beating Sinopharm and AstraZeneca by significant margins (the full report can be read here): 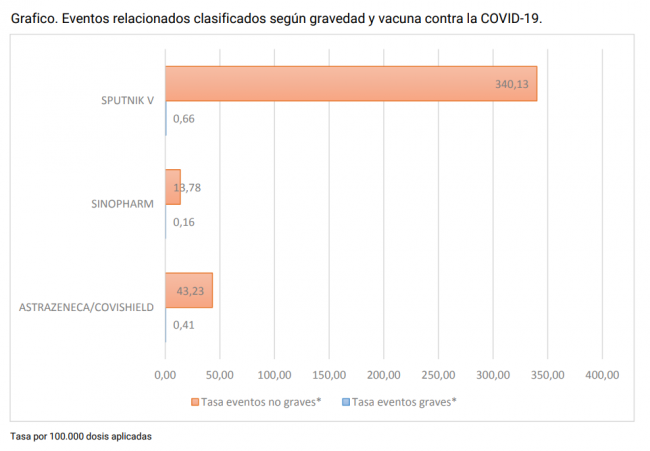 Why does Argentina hate science?

There are even thought crimes being carried out by Russia’s elected representatives. Duma Deputy Mikhail Delyagin argued in an August op-ed that the government’s own data suggested that mass compulsory vaccination had no clear neutralizing effect and was making things worse.

For months, the Russian government maintained it was basically impossible to be hospitalized with COVID if you were fully vaccinated. When it became obvious that this was a slight exaggeration, Gamaleya’s director claimed 80% of jabbed Russians falling ill with the virus had purchased fake certificates and were lying about their vaccination status.

At first they said that it was enough to get vaccinated once every two years so as not to get sick at all, then once a year, then once every six months. Now it turns out that vaccination does not even really protect against getting into intensive care or death. And what is the solution? True, the Minister of Health, Mr. Murashko, still claims that there are no deaths among citizens who have received the vaccine. But people do not live on Mars, they, alas, face these deaths of the vaccinated in life…And then the PR naturally stops working.

It’s doubtful if the PR ever worked. Last month, Deputy Speaker of the State Duma Pyotr Tolstoy conceded that the government had completely failed to convince the public that Sputnik V was safe and effective.

The total lack of transparency has spurred the creation of informal databases and Telegram channels where adverse events can be tracked. Instead of stepping up efforts to address safety concerns, the Russian government has compared concerned citizens to terrorists.

The Kremlin and its credulous cheerleaders maintain that there’s no need to worry about long-term safety because Sputnik V is based on the Gamaleya Center’s proven, time-tested viral vector-based delivery platform. For example, Kirill Dmitriev, the Harvard-educated ex-Goldman Sachs banker who heads the Russian Direct Investment Fund (which provides financing for Sputnik V), claimed in an op-ed published by RT:

Russia has benefitted from modifying for COVID-19 an existing two-vector vaccine platform developed in 2015 for Ebola fever, which went through all phases of clinical trials and was used to help defeat the Ebola epidemic in Africa in 2017.

About 2,000 people in Guinea received injections of Ebola vaccine in 2017-18 as part of Phase 3 clinical trial.

That’s quite a brave claim, considering Guinea was declared Ebola-free in June 2016 following an outbreak two years earlier. By the time Gamaleya’s magic Ebola slurry arrived in Guinea (as part of a clinical trial), there was no Ebola left to fight. In February of this year, Guinea reported its first Ebola death since 2016.

Can Dmitriev or RT offer some clarification here? Send your questions to RT’s famously fearless and objective Russia Desk.

By the way: why would Dmitriev (and Sputnik V’s own website) brag about injecting 2,000 Africans as part of a clinical trial held a year after Guinea was declared Ebola-free? Well, because that’s basically Gamaleya’s greatest triumph — before inventing Sputnik V in record-time. 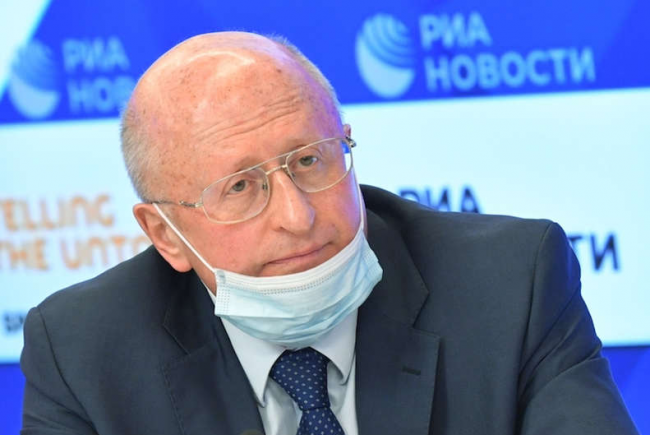 Sputnik V is the Gamaleya Center’s first “viral vector-based” vaccine to receive emergency use authorization outside of Russia. Gintsburg—who has been the director of Gamaleya since 1997—has yet to bring a fully approved vaccine to market, despite multiple attempts.

“[Gamaleya’s] scientists have ‘copy-pasted’ [Sputnik V] from their previous, not accepted by the scientific community, research. In their genetic memory—a criminal case, WHO skepticism and zero drugs introduced into the market,”

…read the teaser of an investigation published by fontanka.ru in July 2020.

With such an impressive track record, it’s hardly surprising that the Gamaleya Center refers to itself as “the world’s leading research institution.” The Center also has world-leading facilities. Seriously, feast your eyes upon these cutting-edge facilities: 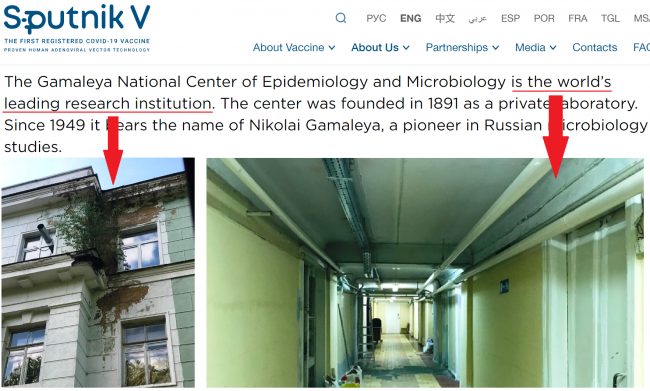 A lot of Russians are also very impressed by the fact that Sputnik V’s #1 fan (and one of the drug’s original investors) is a friendly banker who is trying to introduce a QR code-based payment system in Russia, and is also developing a digital currency in partnership with JP Morgan.

When your favorite WordPress geopolitical analyst exclaims “Sputnik V is safe!” the appropriate response is: how could you possibly know, and why does the Russian government not want to know?

“…But the Russian government would never deceive its own people!”

In June, the emergence of a highly deadly “Moscow strain”—later deemed a “hypothetical phenomenon” — forced authorities to introduce Russia’s first vaccine mandate in the capital. Other regions followed suit.

Yes, the people grumbled — but COVID “cases” immediately began to plummet! COVID “deaths” plateaued! It was a true miracle. 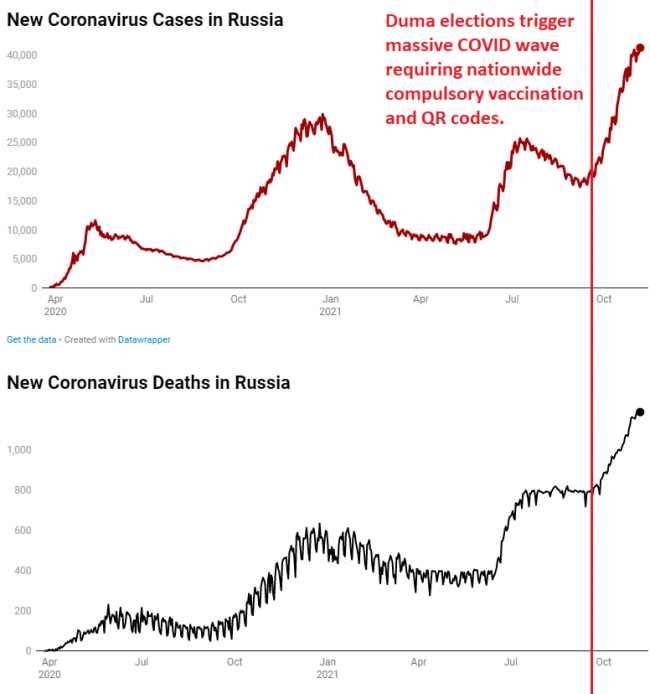 Duma election was a super-spreader event or something?

What a weird coincidence. Obviously, the ruling United Russia party—which had just secured parliament for another five years after an unexpectedly decisive electoral victory—was forced to impose even more coercive COVID policies. If Russians don’t like it, they can express their dissatisfaction at the polls, in 2026.

Russia’s descent into compulsory vaccination is a case study in industrial-scale lying and government duplicity. It’s a very interesting story.

In January, Russia’s president presented a keynote address at the World Economic Forum—his first speech before the esteemed international body since 2009.

Beginning his address with a very friendly and intimate “dear Klaus,” Putin recalled how he first met Mr. Schwab in 1992 and since then had regularly attended events organized by the Fourth Industrial Revolution visionary. 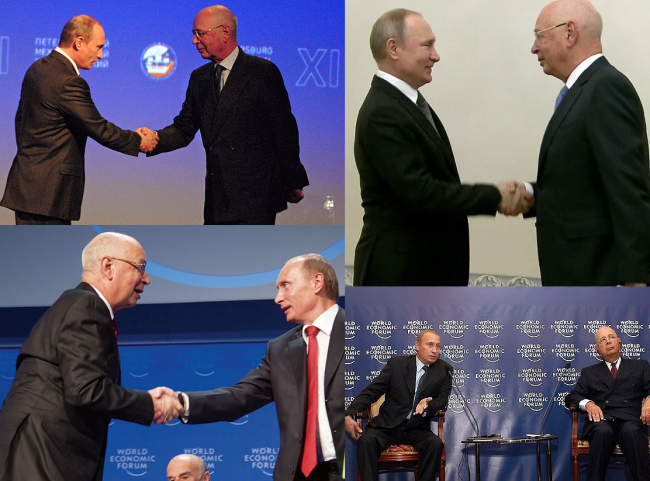 Putin used this very important speech to call for “expanding the scale of testing and vaccinations” around the world, describing COVID as an existential threat that required close international cooperation. The entire global economy will need to be rebuilt from the ground up by central banks, because the virus is just so deadly and destructive:

[T]he key question today is how to build a program of actions in order to not only quickly restore the global and national economies affected by the pandemic, but to ensure that this recovery is sustainable in the long run, relies on a high-quality structure and helps overcome the burden of social imbalances. Clearly, with the above restrictions and macroeconomic policy in mind, economic growth will largely rely on fiscal incentives with state budgets and central banks playing the key role.

Is that how you say “Build Back Better” in Russian?

We’re all trapped in the same oligarch-controlled panpoopticon. Maybe it’s time to accept that, instead of pretending that some jailers are more “based” than others?

Crazy times. Good luck to all.

Riley Waggaman is your humble Moscow correspondent. He worked for RT, Press TV, Russia Insider, yadda yadda. In his youth, he attended a White House lawn party where he asked Barack Obama if imprisoned whistleblower Bradley Manning (Chelsea was still a boy back then) “had a good Easter.” Good times good times. You can subscribe to his Substack here, or follow him on twitter.