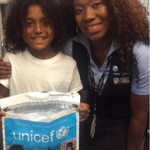 Flying through the skies while advocating for children in need on the ground is what PHL Flight Attendant Janet Thomas describes as her “perfect role.” When Janet first learned about UNICEF’s Change for Good® program, she knew this was her special calling.

For the last 27 years, American Airlines has been the sole participating U.S. airline in UNICEF’s Change for Good campaign, supporting projects and programs that help provide children’s basic needs in communities throughout the world — which often includes emergency response.

As part of caring for people on life’s journey, American’s team members are dedicated to addressing the needs of the communities the airline serves across its global network. After supporting the program for many years, Janet took her involvement to the next level by signing up to serve on the Champions Advisory Council (CAC), a group of team members who lead the Champions for Children employee volunteer group at American Airlines.

Champions for Children collect monetary donations — often just spare change and bills — from customers onboard select international flights to provide life-saving assistance to the world’s most vulnerable children in more than 190 countries and territories. The CAC acts as a liaison between the Change for Good team, the bases and flight attendants to give children the voice, resources and support they need.

“I feel fortunate that I work for a company that allows me to do good while on the job,” Thomas said. “I believe it is our responsibility to help those who cannot help themselves and this is such a simple way to do just that.”

Janet is best known for organizing recruitment events at PHL to encourage and educate her colleagues about the Change for Good program. She wants everyone to know that the need now is greater than before. “Even though the pandemic has caused us to significantly reduce our international flight schedule, the need for aide has not stopped,” she said. “The program is still here, and the need is there.”

Janet loves receiving an empty bag at the beginning of her shift and watching it pile in with donations. “I just know it’s going to help create a better future for a child and there’s no better feeling then that.” She believes it is her duty to protect and take care of all children. Janet enjoys it most when parents allow their children to get involved and help walk the aisle asking for donations.

Flight Attendant Patricio Millan is another one of those special voices. He has made it his life’s mission to walk through this world as a quiet hero and change the world in quiet ways. That’s why he serves as a leader on the CAC and encourages his colleagues (one by one) to sign up to be a Champion.

“When collecting, I look straight into the eyes of the customer,” Millan said. “No amount is too little to make a difference in the life of a child in need.”

With his passion and commitment, he expanded the program in Santiago and reached new heights for monthly collections for UNICEF. Under his leadership, the base went from collecting $250 a month to $2,500. “I don’t want the applause,” he said. “I just want to continue to inspire my colleagues to stay involved in the program and keep advocating for children.” Janet and Patricio are just a few Champions for Children who help to save and improve the lives of millions of children around the world.

This year, in honor of the Champions for Children for their passion and dedication to the program and UNICEF’s 75th anniversary, American will make a $75,000 donation to UNICEF USA. Since 1994, American Airlines has raised more than $17 million for Change for Good.