Police fired rubber bullets at anti-government protesters at Din Daeng intersection in Bangkok, after they refused to disperse.

Before resorting to the use of rubber bullets on protesters, who were trying to break through a wall of shipping containers and a police cordon, in order to march toward their target at the First Infantry Regiment Command, where Prime Minister Prayut Chan-o-cha has his residence, a police officer issued a warning to the protesters that they would face rubber bullets if they refuse to back off.

The use of rubber bullets is an escalation in crowd control tactics. Police had fired countless teargas canisters at the protesters for about an hour, but they failed to break the resolve of hard-core protesters to break through the barricade. 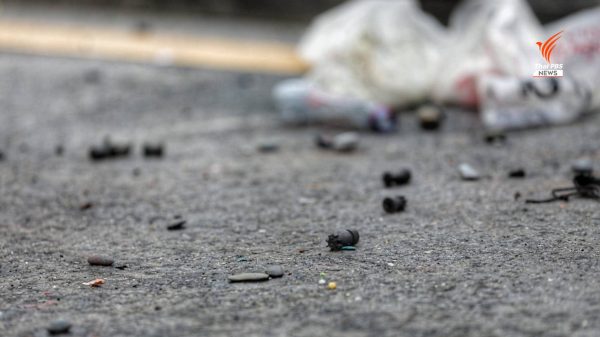 Some protesters threw “ping-pong” bombs and other missiles as police officer warned them that their acts were against the law. Several protesters were seen using water to wash the faces of their colleagues affected by teargas.

At least two water cannons were standing by behind the wall of cargo containers.

Protesters from different political groups first converged at the Democracy Monument before noon today, prior to a planned march to the Grand Palace and Government House. The police preempted the move by advancing toward the protesters, who then numbered only a few hundred, and forcing them to retreat towards Government House.

Upon arrival at the Nang Loeng intersection, however, the retreating protesters found access to Government House blocked with shipping containers and another cordon of police. Theythen decided to head towards the Victory Monument, to joinother protest groups, for a march to the PM’s residence, which is inside the First Infantry Regiment Command barracks on Vibhavadi Rangsit highway.

The post Rubber bullets fired at protesters in Bangkok after teargas fails to break up the protests first appeared on Thai PBS World : The latest Thai news in English, News Headlines, World News and News Broadcasts in both Thai and English. We bring Thailand to the world.