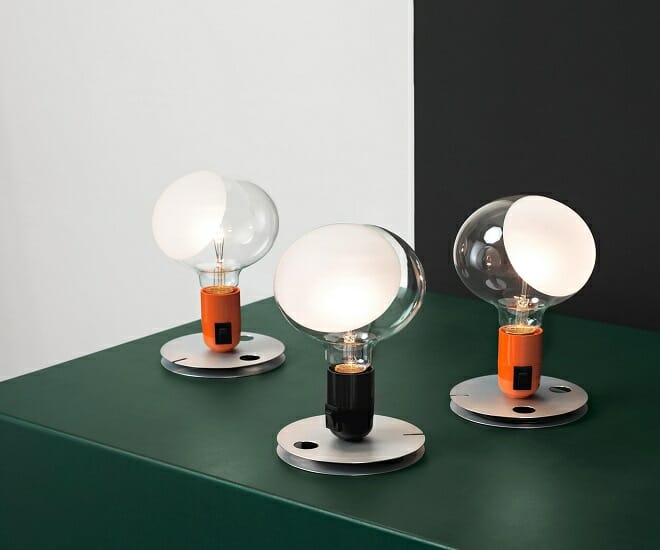 Castiglioni, Magistretti, and Albini are famous Italian designers in the lighting industry who have made their mark with their iconic works recognised globally.

Explore the wonderful, posthumous lighting creations of three design greats from Italy where their legacy continues to live on. Franco Albini was considered to be the most significant Italian “Neo Rationalist” designer of all times and ages. Albini was born in Robbiate in the province of Como in Italy. After graduating in architecture from the Politechnico di Milano in 1929, he started his career in the studio of Gio Ponti. He soon set up his own design firm in Milan in 1931 and one of his pioneering pieces was a 1939 radio made of glass, designed to reveal the machine’s internal components. In the 1940s, Albini was the editor for the Casabella magazine, and it was also during this period that Albini converted his way of thinking to rationalism, eventually becoming one of the key players in the development of the rationalist movements in architecture, furniture, and industrial design sectors.

Given the opportunities arising from the growing reconstruction trends after World War II, Albini worked on researching and developing building projects with renowned Italian architect Franca Helg. Albini’s works are characterised by a rational severity, which was evident in projects such as the renovation of and interior design of the Palazzo Bianco in Genoa (1950), the plan for the display of the Treasure of San Lorenzo in Genoa (1952) in collaboration with Franca Helg, and the restoration of the Palazzo Rosso in Genoa (1952 to 1961). Besides working with Helg, Albini also worked with Dutch designer Bob Noorda for the design of the signage and furnishings for the Linea 1 underground stations (1962 to 1963) in the Lombardy capital city. Albini was also known for his flair in furniture design with notable creations like the Margherita armchair for Bonacina (1950), the Fiorenza armchair for Arflex (1952), the Luisa chair for Poggi (1954), and the Credenza (1967) designed in collaboration with Franca Helg. In addition, the Albini-Helg partnership produced a collection of glass pieces designed for San Lorenzo and crafted by Salviati. Much of Albini’s works are reflective of a minimalist aesthetic effect and made of inexpensive raw materials of the post-war years. Albini also used highly skilled Italian craftsmanship in his designs, merging traditional artisanship with new forms of modernism. During his eclectic career, Albini was also a lighting designer and was most well-known for his AM/AS series of lighting elements. Five of his lamps from the series — consisting of table lamps, floor lamps, and suspension lamps — are now included in Nemo’s Classici collection, which features lamps created by major international designers, too. These lamps, all designed between the 1950s and the 1960s, were characterised by their simple lines, chromed metal, and blown glass. Noticeably, the lamps all reflected Albini’s rational and effective approach to finding structural solutions that were elegant, innovative, and functional, at the same time charmingly showing the product’s construction concept.

Albini’s works attained numerous awards and received three prestigious Compasso d’Oro awards in his lifetime — a reflection of his achievements and success as a leading and influential architect and designer of the 20th century.
www.nemolighting.com Vico Magistretti was hailed as one of the masters of modern Italian product design. Born in Milan, Magistretti graduated from the Politecnico de Milano in 1945 after his initial studies at Champ Universitaire Italien de Lausanne in Switzerland. Magistretti then worked in his father’s architectural studio, where he did architecture and design, which included urban planning and industrial design. As a young architect, Magistretti was inspired by modernist ideas and sought to create objects which were simple, functional, rational, and elegant. His stance was made clear in the first pieces he exhibited in the late 1940s, which included bookshelves suspended from metal tubes, a bookcase that resembled a ladder, and stackable tables. Magistretti also made his mark as an avant-garde architect with works such as the Corso Europe office block and the Villa Arosio. In 1956, he became one of the founders of the Association for Industrial Design (ADI).

Many of Magistretti’s iconic pieces were created during the 1960s, when he moved into the field of mass-produced furniture, working for top Italian companies like Artemide, Cassina, De Padova, Flou, and Kartell — just to name a few. His fascination with industrial production also led to his ground-breaking work with plastic and he was among the first designers to create home furnishings out of plastic, which was used in the production of the Selene stacking chair and the Vicario and Gaudi armchairs for Artemide. Today, these chairs are among Magistretti’s works on display in museums all over the world, many of which are part of permanent exhibitions in museums such as the New York Museum of Art. In the course of his illustrious career, Magistretti received numerous awards including Compasso d’Oro awards in 1967 for the Eclisse lamp, and in 1979 for the Atollo lamp. The Eclisse table lamp for Artemide was one of Magistretti’s best-known lighting designs, which featured an illuminated globe that could be rotated to give off varying amounts of light. The Atollo table lamp for Oluce was a wide cylinder made of lacquered aluminium, pointed at the top and capped by a hemisphere-shaped shade. Other notable lighting designs by Magistretti included the simple yet elegant Ananas and Bruco wall lamps, the unusual Margaret table lamp, and the Morocco hanging lamp with a grid track that holds up to 36 glasses for Fontana Arte. Magistretti was also awarded the Compasso d’Oro in 1995 for his outstanding career.

In 2003, the northern Italian city of Genoa set up an important exhibition in his honour. Although he has passed on, the essence of Magistretti’s works — which played on simplicity and freshness — continues to inspire the next generation of designers. Most of what Magistretti designed is still being manufactured and is much sought after by collectors today. Achille Castiglioni, born in Milan (1918 to 2002), is considered as one of the greatest masters in twentieth-century design, having won several Compasso d’Oro awards and his designs in the permanent collection in the MoMA in New York. Often collaborating with his brother Pier Giacomo, the Castiglioni brothers’ most famous design is the Arco lamp (1962), which is a curved arm with a lampshade at the end extending eight feet from the stabilising marble base. Always injecting humour into his works, he then designed the Snoopy lamp in 1967, which is essentially a table lamp shaped like the comic dog of the same name. On top of the many great lighting designs for Flos, he also designed for other brands notably Zanotta (Mezzadro and Selle stools). Designed by Castiglioni in 1962 for Flos, the Arco Lamp continues to be popular today. The solid Carrara marble base, with its distinctive hole, and its height and length make the Arco Lamp the focal point for any room. The head of the lamp is adjustable to direct the light. The Arco Lamp has the distinction of being part of the collection at the Museum of Modern Arts (MOMA). In 1971, The Lampadina was designed by Castiglioni. A cute table lamp finished in painted steel and available in three different colours, the lamp’s design feature is the quirky oversized frosted light bulb which recalls a light bulb going on in the head. Talk about a good idea indeed!

Some of these lighting designs may be more than 40 years old, but still, these luminaires by these lighting greats make an immediate design statement in any home today. And always insist on originals, as buying reproductions simply contributes to a false economy. Best of all, they can become treasured pieces in many years to come!