Some of the protesters scaled the monument to place a flag at the top.

The protesters converged at the October 14 memorial, also on Ratchadamnoen Avenue, at about 3.30pm, before they marched toward the Democracy Monument, led by a drum majorette and a banner which read “Prayut Out. Write a New Constitution. Reform of the Monarchy”.

The procession circled the monument three times, as speakers riding on a sound truck blasted the prime minister for his alleged mishandling of the COVID-19 pandemic, resulting in the deaths of thousands of people. 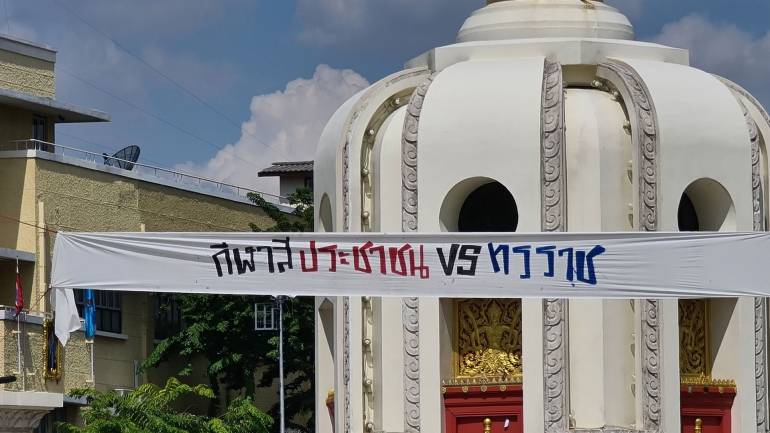 Thanat Thanakitamnuay, a protester who lost an eye during a previous rally, told those gathered that several other demonstrators were also injured, allegedly by the police, and some of them were detained.

He also said that the protest today would be creative, unlike other protests in the past, featuring a soccer match and skateboard show.

Separately, at Din Daeng intersection, hardcore protesters, who call themselves the “Talugas group”, fought with the police using bricks, cherry bombs and sling shots, as they tried to move toward the garrison of the First Infantry Regiment of the Royal Guards, where the prime minister has his residence. 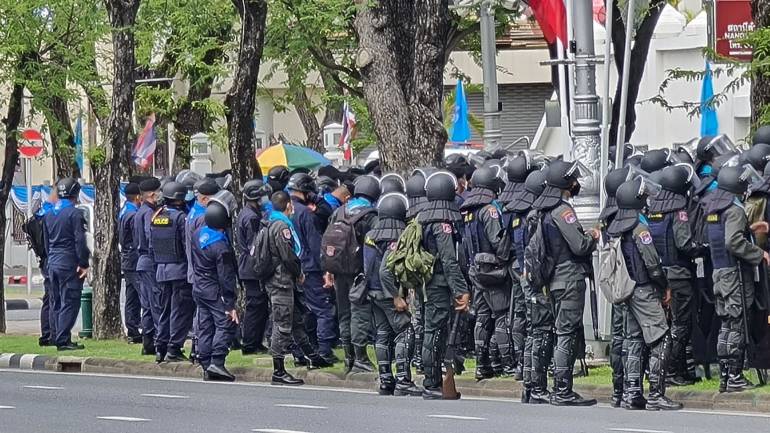 In a change of tactics, police moved all the shipping containers from Din Daeng intersection yesterday, after residents of area complained about the threat from rubber bullets, teargas, large firecrackers and homemade bombs used by the police and young protesters.

Crowd control police formed a cordon in front of the Thai Army Band Department, not far from the First Infantry Regiment.

Police deployed a long range acoustic device, or sound cannon, teargas and rubber bullets against the defiant protesters, after they refused to disperse as ordered by the police. They also claim to have found a firearm in a backpack seized from one of the protesters.

At about 6pm, a standoff remained between the two sides.

The post Talufah protesters hold sports event near Democracy Monument first appeared on Thai PBS World : The latest Thai news in English, News Headlines, World News and News Broadcasts in both Thai and English. We bring Thailand to the world.