The $10.5 billion-plus acquisition of Tesco’s Southeast Asian operations late last year brought the chain back under CP Group more than two decades after it sold Lotus to the U.K. supermarket chain. The conglomerate has since been rebranding and adapting the stores to consumer habits that have changed under pressure from both the COVID-19 health emergency and competition from online-only retailers.

The “Lotus’s” supermarket that opened its doors in downtown Bangkok this past May is a testing ground for this strategy. The “s” in the new suffix stands for “smart,” according to the company.

Throughout the store are “Scan & Go” panels, where shoppers can scan QR codes to buy products on display and have them delivered at times of their choosing. This lets customers handle items in person before purchasing and shop without lugging bags home.

The store offers a range of other digital-physical hybrid services, including “Click & Collect” — letting customers make purchases online and pick them up in-store — and home deliveries via the Grab superapp.

The concept store sits in an intensely competitive neighborhood for retailers. “The fact that I don’t need to walk around with heavy or bulky stuff if I stop by in the middle of a shopping trip is appealing,” a 35-year-old Bangkok resident said. 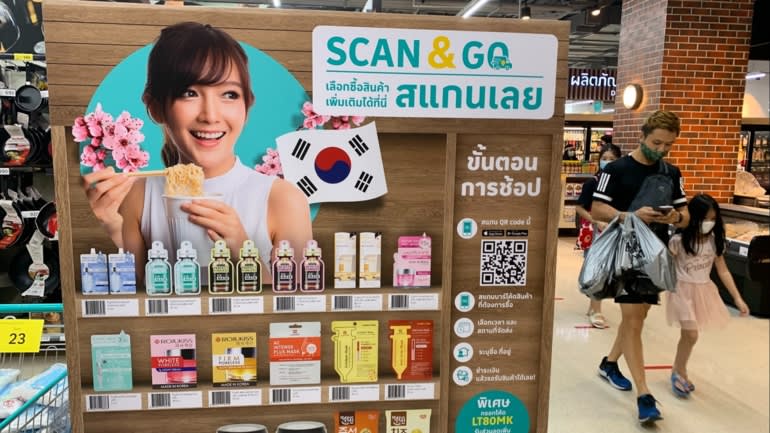 This digital pivot is part of CP Group’s efforts to burnish the chain’s image and shed its association with Tesco, which Thai consumers had come to associate with cheap, low-quality goods. The British retailer, struggling with competition from German discount chains in its home market, had lacked the resources to invest in improving Asian operations.

The conglomerate is unifying its supermarkets under the Lotus’s brand, removing the Tesco name and switching from the old red-and-green logo to a light blue-green. “We expect the rebranding of our entire estate of 2,100-plus stores in Thailand to complete in 2022,” Sompong said.

CP will also leverage the rest of the group’s capabilities to improve the fresh-food selection at Lotus’s — a particular weakness during the Tesco days. Food is a core business for the conglomerate, generating a third of its sales.

“Our particular focus is on fresh food with great quality” and a broad array of offerings, such as poultry, meat, seafood, and imported and local fruits along with fresh vegetables straight from the farm, Sompong said.

CP’s convenience stores may come into play as well. The group has 12,000-plus 7-Eleven locations in Thailand, controlling more than 80% of the market, and has data and other retail know-how that could be applied to the supermarket business.

The group plans to expand the supermarket chain by 20% compared with before the acquisition in pursuit of economies of scale. “In 2021, we aim to expand with an additional 300 to 400 branches in different formats,” including in the “mini-supermarket” category, Sompong said.

The wide-ranging conglomerate’s intense interest in the supermarket business is the product of Senior Chairman Dhanin Chearavanont’s personal attachment to the Lotus chain, which originally belonged to CP and which Dhanin has called his “child.”

After taking a beating amid the 1997 Asian currency crisis, the struggling CP sold 75% of Lotus to Tesco the following year and unloaded its remaining stake in 2003.

But while this Thai household name is back in its original owner’s hands, the retail landscape has been transformed in the intervening two decades with the rise of e-commerce and convenience stores. Lotus’s may end up competing with 7-Eleven stores also run by CP.