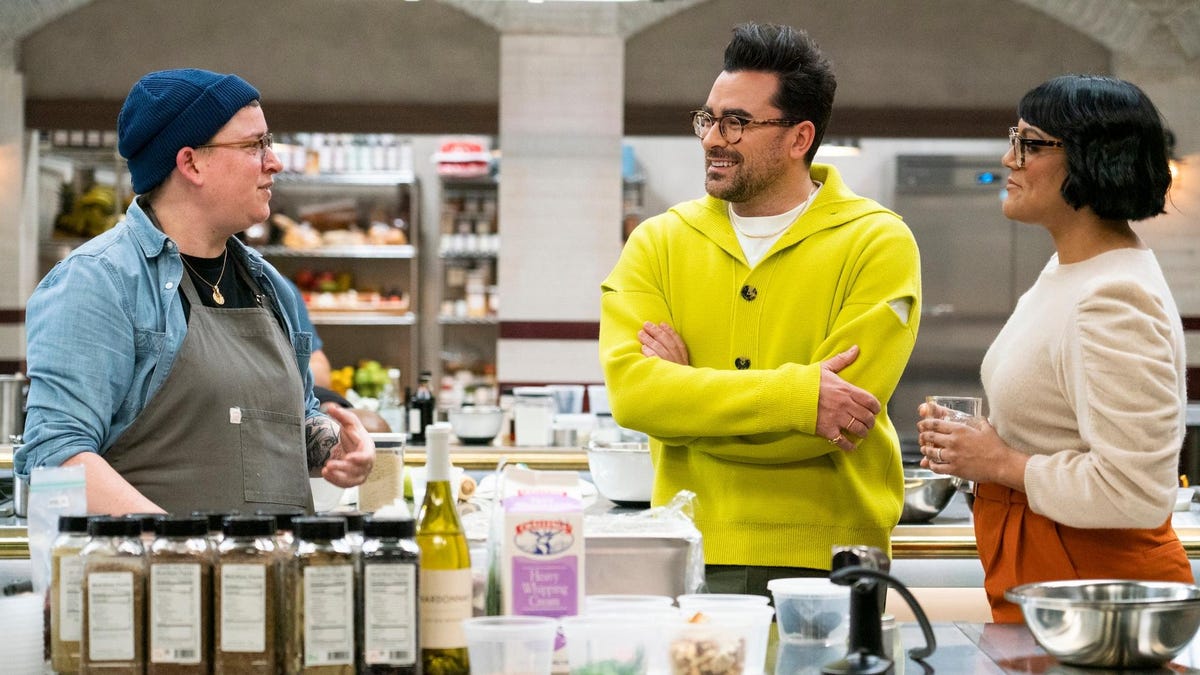 The house is full of people. The refrigerator is full of food you can’t eat yet. You’re all fighting for spots on the couch and control of the remote and, 2022 being its 2022-est, probably fighting about some serious things, too. What TV show do you watch to set the right tone? What’s something everyone can agree on?

Cooking shows are the great equalizer—at least, they are at my family gatherings—but some of them can be stressful. The high drama of Gordon Ramsay punching through an undercooked salmon fillet because the blue team can’t get their act together on Hell’s Kitchen is totally engrossing, but you don’t need to add any more tension to the Thanksgiving environment. What you need is something as pleasant as a mimosa and a slice of leftover pie for breakfast. What you need is The Big Brunch.

What is The Big Brunch?

A new series streaming on HBO Max, The Big Brunch was created by Schitt’s Creek star/creator Dan Levy and features 10 socially minded chefs who all have dreams of building (or scaling) their projects. Six episodes are out now, and the final two episodes drop on Thanksgiving Day.

“Everybody has somebody in your life that is doing something extraordinary, changing their community for the better, and all they need is that big break to get them to that next level,” Levy says in the show’s introduction. “So we built a show to celebrate 10 chefs, each making a big difference to their community, whether they’re imparting their culinary passions to a new generation of students, educating people on the beauty of their heritage, or celebrating the power of family.”

G/O Media may get a commission

Why The Big Brunch is perfect Thanksgiving TV

The show is quiet and soothing, like visual ASMR: the set colors are stylishly muted, the cooking happens at a reasonable pace, and there’s just a calm, positive vibe to the whole thing. Even when the judges are giving critical feedback, they’re doing it in a kind and encouraging way. At first I didn’t know what to make of a cooking competition show without dramatic cliffhangers or people questioning their life choices, but I quickly realized that I didn’t just like it—I loved it.

With The Big Brunch, Levy has created the same kind of nurturing environment that he did on Schitt’s Creek: Everyone is welcome and everyone is accepted without question, free to be who they are, quirks and all. The chefs come from a diverse set of backgrounds, both personally and professionally, and everyone is treated with a supreme level of respect. Even when a dish fails, the judges provide not just constructive criticism but positive encouragement, and in that environment, the contestants show enormous growth in just a few episodes.

“Losing sucks, but I got the chance to meet some incredible people,” the first person to get eliminated says. “I did not expect it to be so meaningful in the sense of the relationships.”

It’s a sentiment that all the chefs seem to share. “We are becoming a family, and when we put this energy and this dynamic together, it’s just really beautiful,” another says.

When giving feedback on a dish, Guidara stops to speak with the chef about their future culinary plans.

“If that’s your passion, you can’t waste time doing anything else but that,” Guidara says. “There are so many places where people are hungry for extraordinary food served by people who are warm and gracious like you are. And you have the talent, but it starts with deciding that you’re going to do whatever it takes to come to life.”

Not so long after, the contestant gets eliminated. On their way out, they aren’t angry or resentful. They’re just truly happy to have been there, and empowered for the future.

That, among other reasons, is why I’m telling you to watch this show with your family this week. It’s going to make you excited about eating good food, but it’ll also usher a warm glow of positivity into your home, at the exact moment you need it.

You have time to catch up on the first six episodes before the final two drop on Thanksgiving. It hasn’t happened yet, but I’m still holding out hope that someone will make a reference to folding in the cheese.