For the perfect amalgamation of Greek and Italian culture, the Mediterranean island of Sicily is definitely worth a visit. It’s beautiful, the weather is almost always great, with deep winter never going below the 10°C mark. But being one of the biggest islands in Europe, it can be difficult to pick a spot to stay in Sicily. Luckily, we have several picks of luxury hotels in Sicily for you to stay in.

These hotels are a blend of the best spots in Sicily to be at. From the city area in Palermo to the hilly areas of Taormina and the coastal ruins of Syracuse, there are many stunning landscapes to be found in this large island. There are even hotels situated within vineyards, bringing you closer to Sicilian wine right from the source. Needless to say, the luxury hotels in Sicily are gorgeous, ranging from modern designs to grandiose, aristocratic ones.

While in Sicily, there are several things that you’ll need to do. Visit the largest active volcano in Europe by either climbing it or skiing down its peak during winter. Mount Etna is a major tourist attraction, but you can also view it from afar via the cable cars some 3,000 metres away.

Next, you must get to know Sicily’s Greek culture by visiting the Valley of the Temples, an archaeological park with remains from eight temples that were built between the 5th and 6th century BC. This park is the largest archaeological site in the world. Also worth visiting is the Villa Romana del Casale, home to some of the most stunning mosaics in the world. Of course, you can’t miss out Sicily’s beaches. One of the more notable beaches to visit include Cefalù, where Cinema Paradiso, a 1988 Italian movie was filmed.

Now that you’ve gotten your itinerary settled, it’s time to take on the difficult task of picking which luxury hotel in Sicily to stay in. 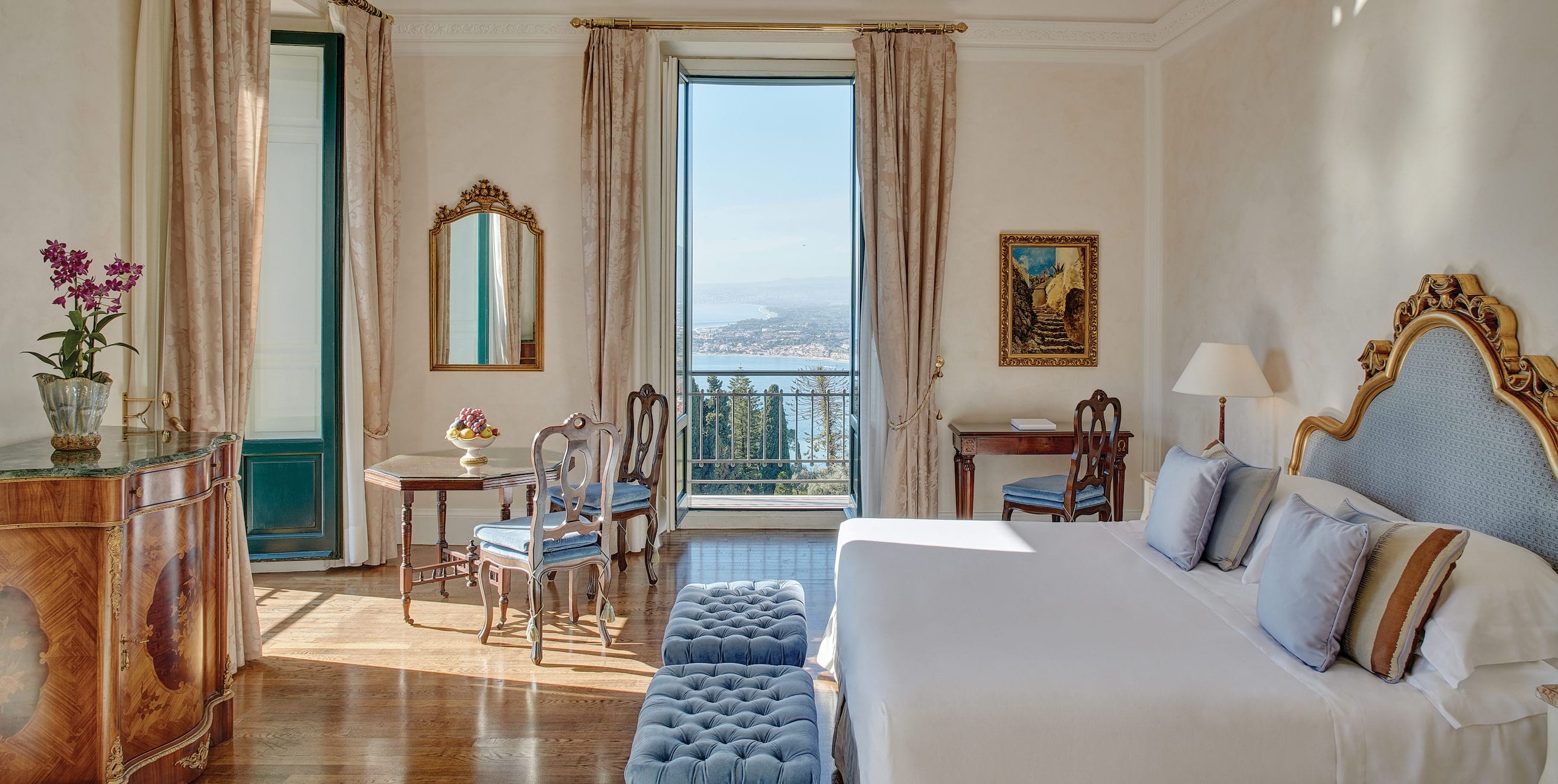 In Sicily you will find not one, but two Belmond hotels. This is one of them, situated in the charming little town of Taormina. Its hilltop vantage point allows you unprecedented views of the iconic Mount Etna and the ocean—perhaps one of the best views any hotel in Sicily can offer.

It’s also located right beside a third-century BC Greek amphitheatre, coupled with a 19th-century luxurious facade. Back in its heyday when it was a mere five-bedroom guesthouse, notable creatives have stayed there, including the likes of Oscar Wilde and Truman Capote. Now, there are over 70 rooms and suites across two buildings, but the property still maintains its old-fashioned glamourous ways in terms of style.

The in-house restaurant serves up no-fuss Sicilian style dishes, while reviews have mentioned that you need to get an Etna Spritz as the evening’s aperitif, made with local orange liqueur rather than Aperol.

If you fancy a change of scenery, you have access to beach facilities at Belmond’s sister property in Sant’Andreas, which basically gives you the best of both worlds. Otherwise, the heated pools on Timeo’s grounds are situated at the gardens, offering you the same gorgeous view of Mount Etna. 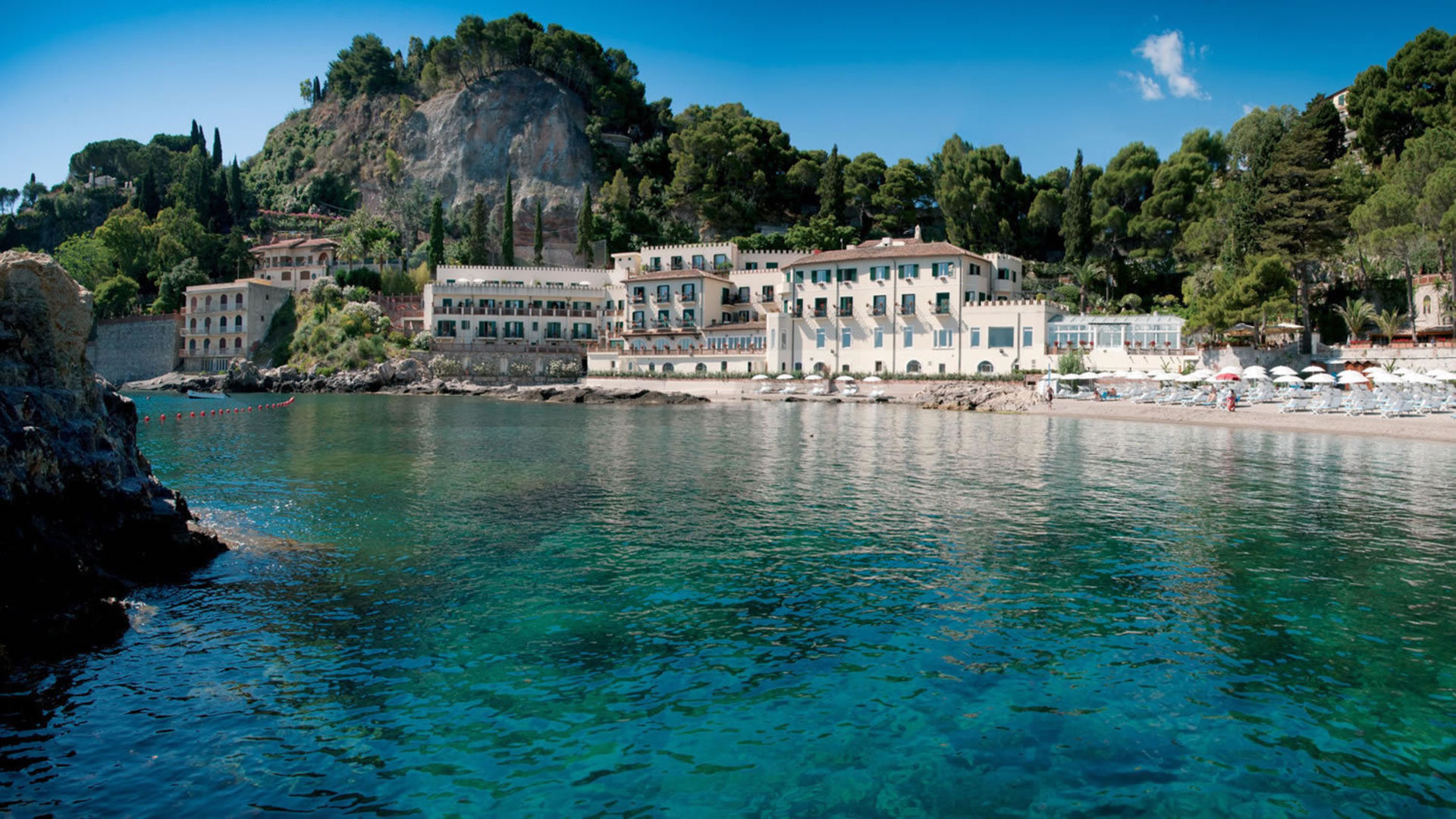 Meanwhile, down at the beach of Taormina lies the Belmond Villa Sant’Andrea, fashioned out of what once was a Cornish engineer’s private villa, over a century ago. However, the Sant’Andrea property is decidedly more updated in style than its sister property thanks to its floor-to-ceiling windows, contemporary artworks, infinity pool, and wellness centre.

Thanks to its location by the beach and off the coast road, noise volumes are low and guests can enjoy a peaceful, traffic-free time at the villa. The rooms are classically elegant Italian fitted with neutral tones, while the bathrooms are decadent with Sicilian ceramics and copper bathtubs.

Similar to the Timeo property, food at the in-house restaurant in Sant’Andrea is Sicilian with a focus on seafood. Have it on the terrace for a stunning view of the sea, and head to the bar in the evenings for some drinks and music.

For a complete change in scenery—and not one that is either town or coast—head towards a vineyard of one of the leading wine estates in Sicily: Planeta Estate. Rent a car and take a scenic drive towards the western part of Sicily and you’ll be rewarded with views of Segesta and Selinunte, notable Greek temples.

Unlike most accommodations you’ll find in the popular areas of Sicily, La Foresteria Planeta Estate is anything but. It’s a modern designed building filled with open spaces, contemporary art, and of course, a stunning infinity pool. Naturally, when located within a vineyard, you’ll be able to go for wine tastings often. There are also cooking courses available with the chef, to fill your languid days.

As for the rooms, there are only 14 available, so things will be intimate. However, all the rooms are spacious and come fitted with French windows with their own terraces. Have a taste of sleeping in a traditional Sicilian iron bed as well, amidst the overall modernity of this property. 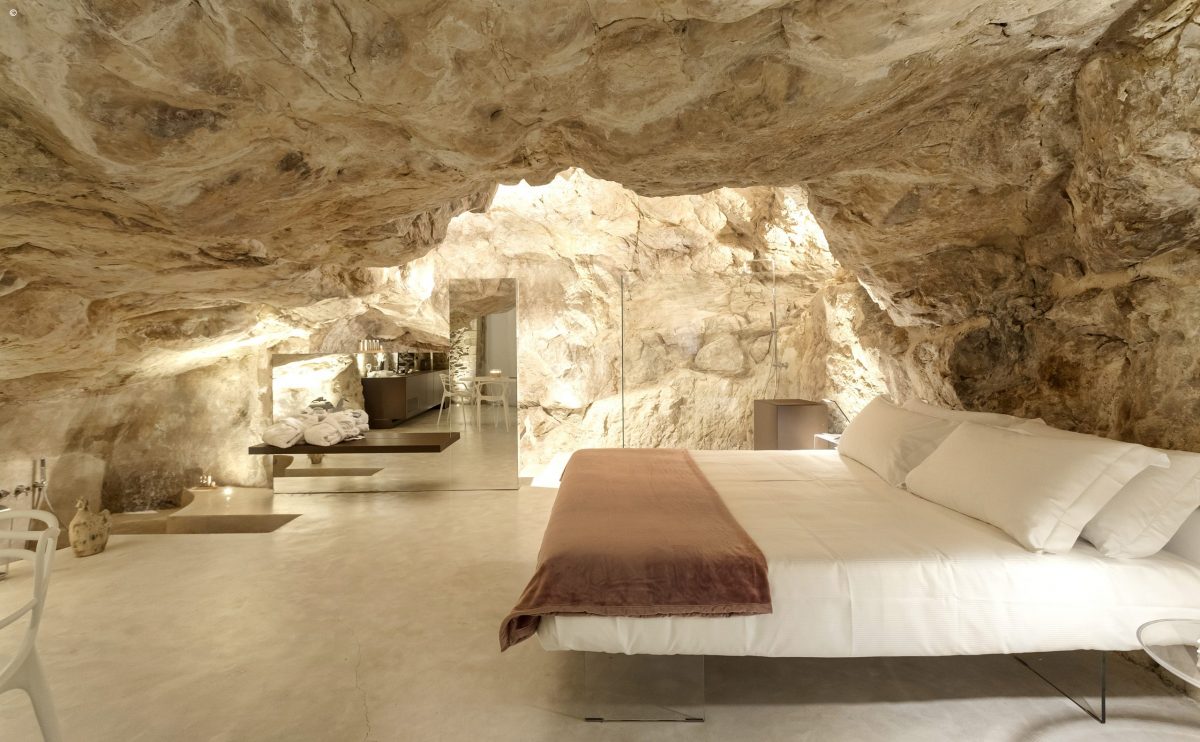 Imagine dining in one of Sicily’s best two Michelin-starred restaurant and then adjourning back downstairs for the night. That’s what you get at the Locanda Don Serafino, a gorgeous cavelike boutique hotel and an award-winning restaurant.

The story behind the unique structure of this hotel is that it was carved out of Pietra pece, a fusion of limestone and petroleum. When the area experienced an earthquake back in 1693, the town was rebuilt using stones from the destroyed buildings. The rooms in this hotel feature a mix of salvaged rubble and spaces carved out directly from the rock. Hence, the space isn’t particularly enjoyable for claustrophobics, otherwise, it is a stunningly unique accommodation to check in to.

All 11 rooms feature bespoke furniture and natural floors either from Pietra pece, limestone, or resinated cement. Textile and fittings are kept neutral to maintain the overall elegance of the space. Whenever possible, book the junior suites and bask in the stone arches and gorgeous bathroom. 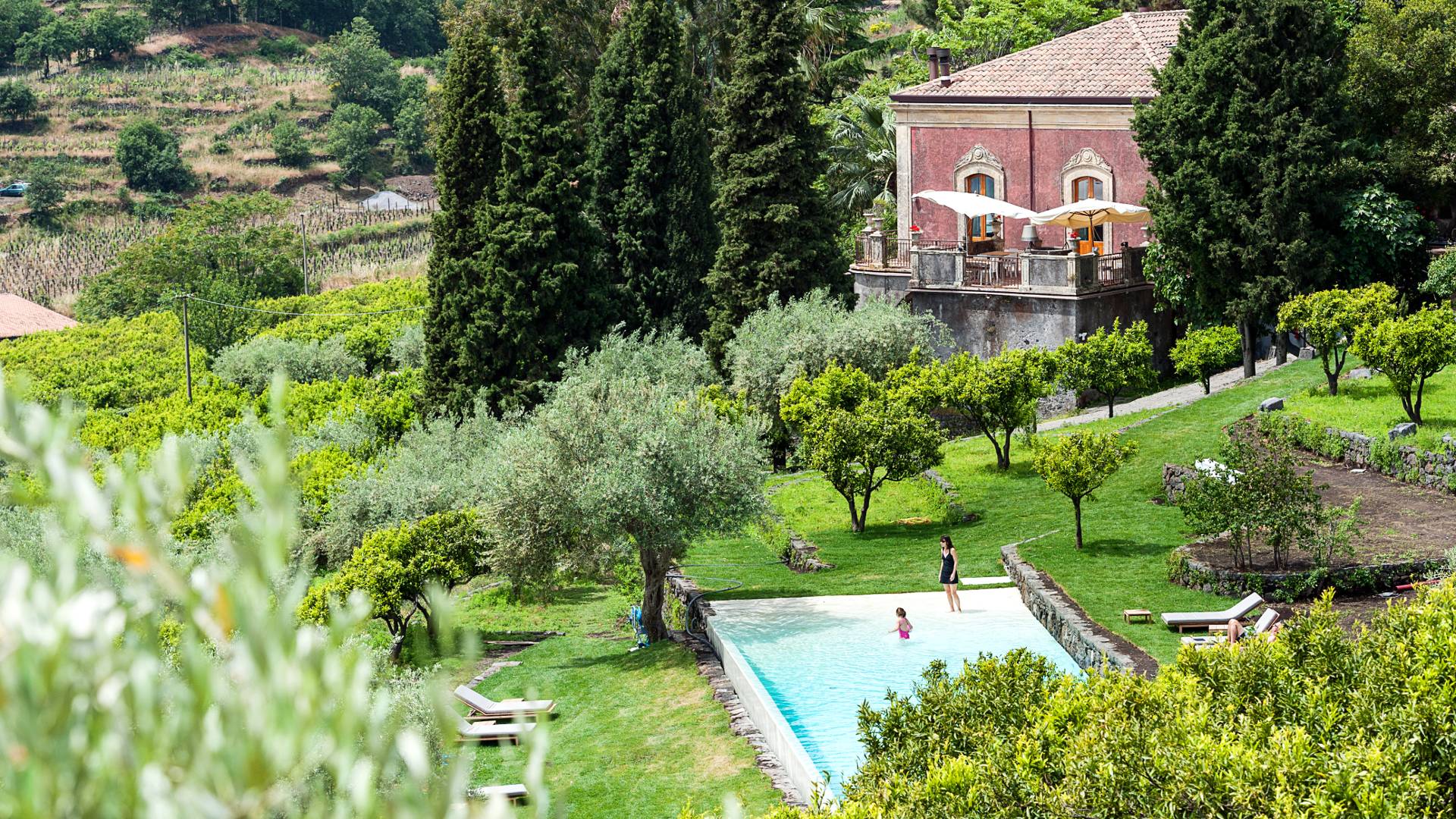 Yet another accommodation worth travelling to the outskirts of Sicily is the Monaci delle Terre Nere, situated in the countryside. This eco-chic hideaway is a restored palmento (an old winery), with many of the restoration processes paying attention to traditional Sicilian materials. In fact, this hotel is one of the only three Eco-Bio certified hotels Sicily. Perhaps a good thing to consider if you’re attempting to reduce your carbon footprint on your travels.

The plum-coloured building is certainly eye-catching, and its location on the eastern skirts of Etna means that you can go trekking on Mount Etna from the hotel itself. There are 27 rooms and suites in several buildings across the property, most of which still retain its original beams and lava stone walls. But not everything is extremely old—the owners artfully blend these elements with vibrant, contemporary art pieces and 20th-century furniture.

As for dining options, you’ll find that most of the produce served is grown from the hotel’s organic farm or sourced from other organic producers. You can also go for wine tastings thanks to the estate’s 15-acre winery, and the cocktail menu is equally as interesting thanks to the head bartender’s homemade infusions and syrups. 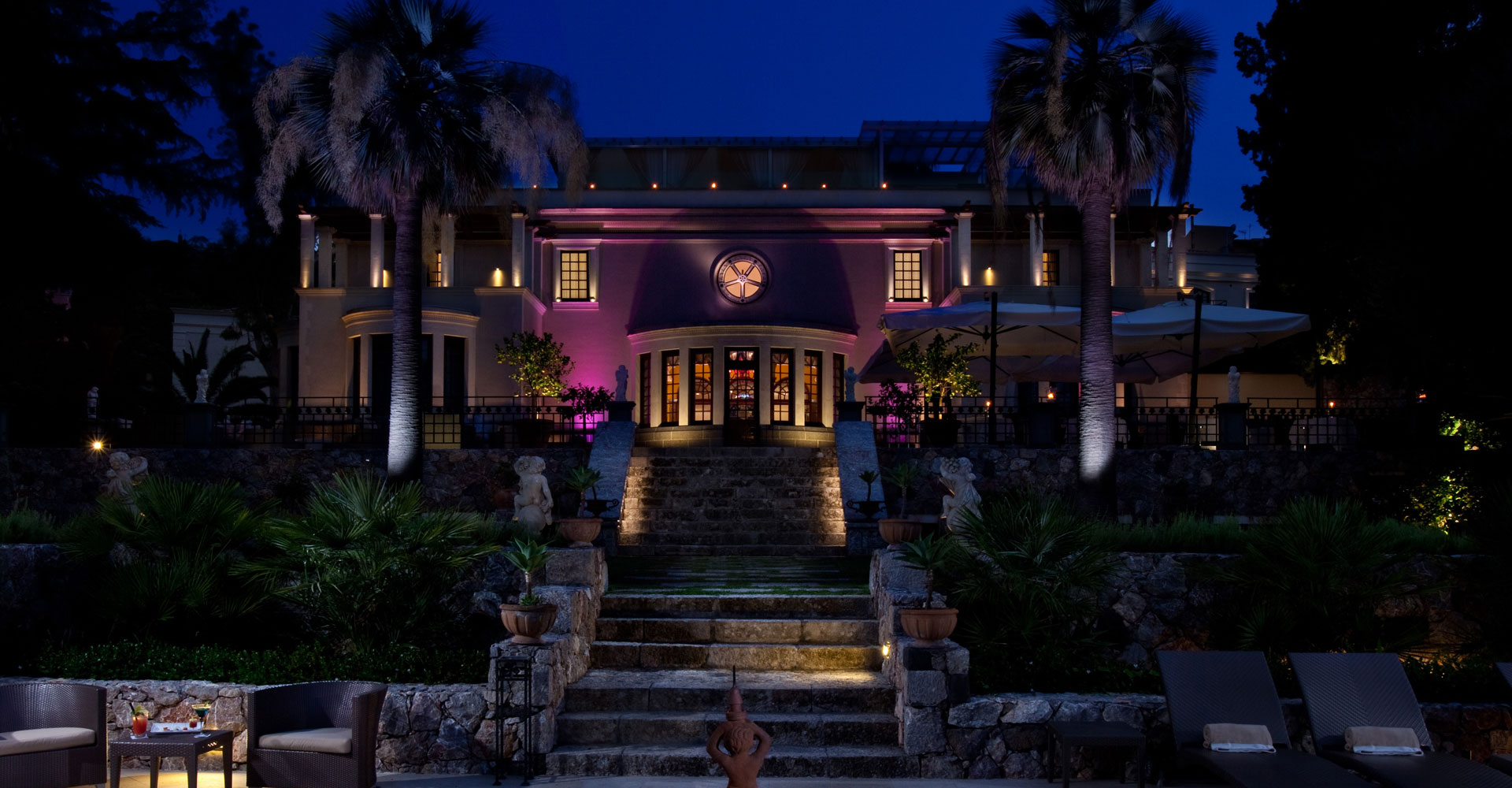 Everything about The Ashbee Hotel looks luxe—from the striking garden grounds and its clifftop location to the fact that it was built from the ruins of an ancient Greek amphitheatre in Taormina. Even rolling up to the hotel is a sight, thanks to the grand villa facade.

Inside, there are 25 spacious rooms with elegant antique furniture and either a patio or terrace looking out to the Ionian Sea. If you don’t fancy dining on the panoramic rooftop Terrace Bar or the in-house restaurant serving up classical Italian dishes, the hotel is just a short walk from restaurants and boutiques in the centre of Taormina. Never miss, of course, the gorgeous infinity pool that looks as though it’s connected to the Ionian Sea.

One important thing to note is that The Ashbee Hotel is closed from February to the end of March, so plan your trip wisely around that. 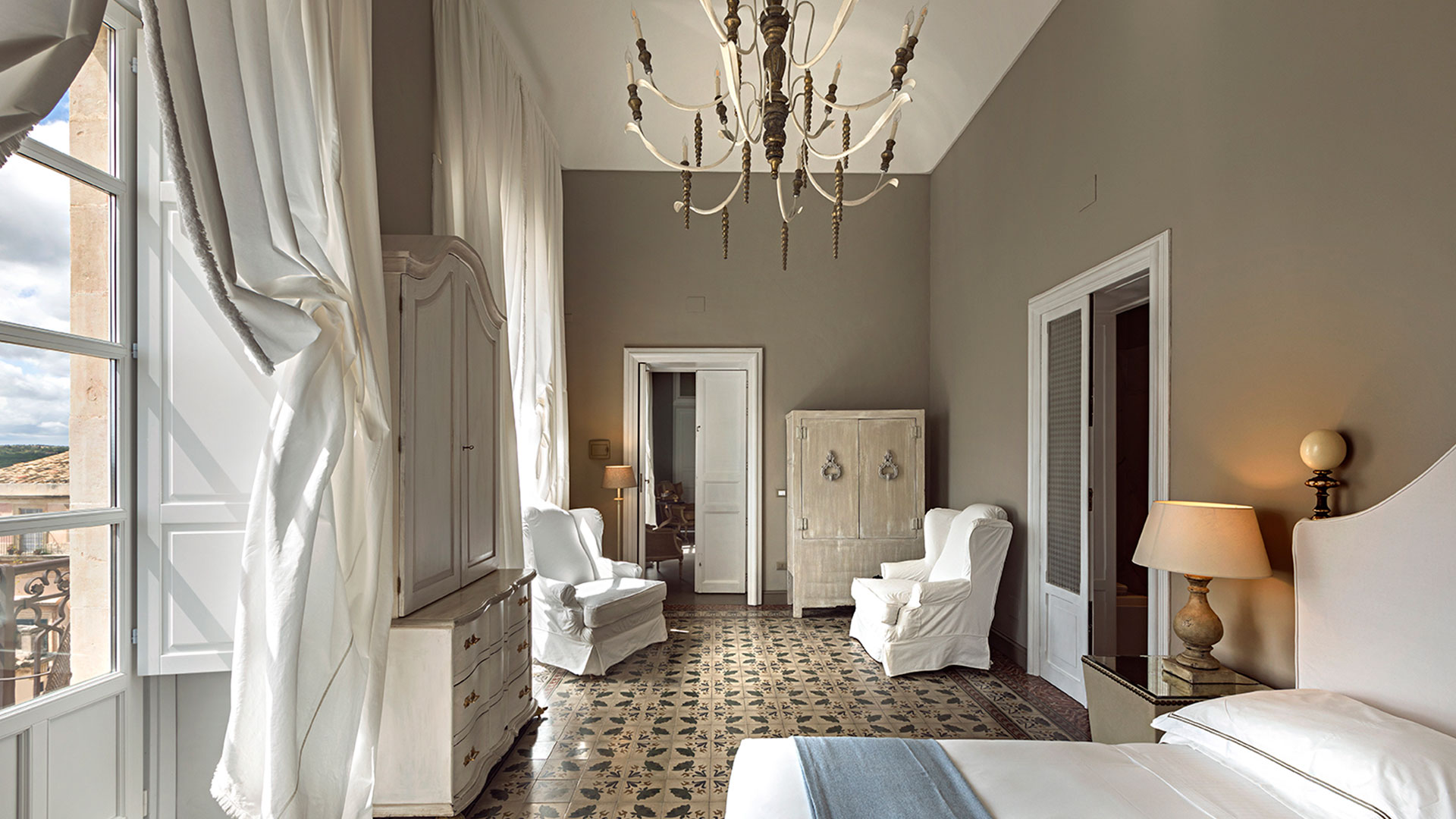 Want to stay in a former Sicilian palace? Then the Seven Rooms Villadorata is your boutique hotel of choice—luxe, but not exuberant. You can feel it immediately upon stepping into the rooms—walls are kept to an elegant soft grey shade with furniture and fittings inspired by the late Baroque period. Ceilings are high with white shutter doors, the flooring is original encaustic tiles, and decorative items include random luxe knick knacks such as a Chinese Ming-period vase.

Ristorante Manna is the in-house dining outlet, serving Mediterranean flavours with simple recipes. Otherwise, its location in the centre of Noto offers you an abundance of gastronomical activities as well as a nice walk to admire the Baroque buildings that the town is so known for.