A child prodigy, Bulgarian operatic soprano Sonya Yoncheva has been “working”, according to her own words during an interview with Metropolis. Yoncheva having studied piano and voice at the National School for Music and Dance in Plovdiv, has achieved a rapid rise to fame in recent years. In 2010, she took both first prize and the special CulturArte Prize at the world’s leading opera competition, Operalia, founded by Rolex Testimonee Plácido Domingo.

I starred in Lucia di Lammermoor at the Opéra de Paris. That was really a highlight of my career because it marked the first time I was trying the Bel canto repertoire. Just a few months ago I was back in Paris to do Don Carlos. That was also a huge recognition of everything I’ve achieved up until now. – Bulgarian operatic soprano Sonya Yoncheva 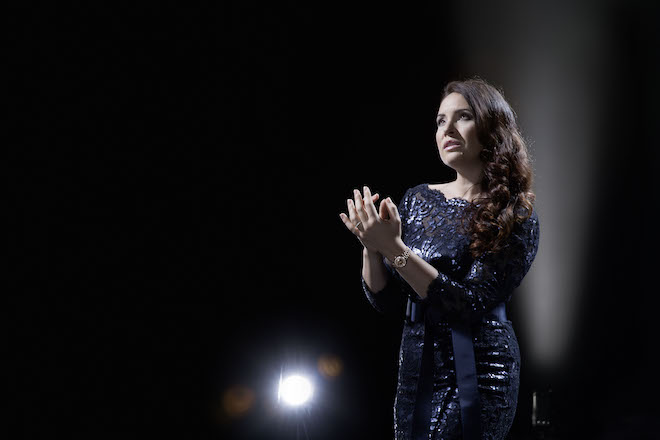 Before long, Yoncheva began to take leading roles across Europe. In 2011, she joined Domingo as a fellow Rolex Testimonee. By 2013, among her many engagements, she performed at the Opéra national de Paris in the title role of Lucia di Lammermoor. Today, she’s part of a Rolex initiative supporting musicians and singers during this critical period of COVID-19.

Starting on 21 August 2020 and continuing through to early September, the three Rolex “Perpetual Music” concerts will take place in Italy, Germany and France. As a preamble at each of the three concerts, Yoncheva and two other fellow Rolex Testimonees – Juan Diego Flórez and Rolando Villazón, will perform the repertoire prepared with singers and musicians, taking turns to perform solo or in various ensembles.

These concerts involve approximately 100 artists whose work and lives have been adversely affected by the pandemic. The concert schedule is as follows: Teatro Rossini, Pesaro, Friday 21 August, with Juan Diego Flórez, featuring an orchestra; Berlin Staatsoper, Tuesday 1 September, with Sonya Yoncheva in a recital programme; the Opéra national de Paris (Palais Garnier), Thursday 3 September, with Rolando Villazón and Renaud Capuçon, featuring a repertoire of baroque and chamber music. French violinist Renaud Capuçon, who will join the proceedings in Paris, also participated in organising this wonderful initiative.

“During these difficult times, when musicians have suffered both the loss of audience and income, our aim is to provide them the opportunity to perform with renowned artists at prestigious venues with the finest acoustics,” said Arnaud Boetsch, Rolex Director of Communication & Image.

Rolex Testimonee Rolando Villazón, in the role of Lucio Silla at the Salzburg Festival in 2013

“By broadcasting the concerts via medici.tv, a Rolex partner for over a decade, we are able to give worldwide visibility to the artists supported by the initiative. Significantly, this gift of time and exposure is in keeping with the company’s pursuit of excellence and its long-term commitment to foster the work of those who aim to reach the pinnacle of their profession. Last but not least, within the context of these unprecedented circumstances, this project is also a way for us to help keep music as an essential element in our daily lives.” – Arnaud Boetsch, Rolex Director of Communication & Image.

Rolex Testimonee since 2005. successful stage director, novelist, TV personality and Artistic Director of the Mozartwoche Salzburg, Rolando Villazón is one of the music world’s most critically acclaimed and treasured lyric tenors and among today’s most versatile artists.

With a career that includes performances on the world’s leading stages, Peruvian Juan Diego Flórez has been a Rolex Testimonee since 2015.  and is one of today’s most celebrated and beloved tenors.

My watch stands not only behind the hard work I put into my career, but also behind the many sacrifices my family did for me. – Yoncheva on the significance of her Oyster Perpetual Pearlmaster 34

Falling in love with the elegance and tradition of the Rolex Oyster Perpetual Pearlmaster 34 in 2016, Sonya Yoncheva acquired it while in Paris. Yoncheva considers it a sign of destiny as Paris had always connected to her career.  Yoncheva’s Oyster Perpetual Pearlmaster 34 has followed her over the years, and across many of performances and travels.  The Rolex artist was named Medici.tv’s 2017 Artist of the Year. Last year, she was named winner of the 2019 Readers Award of the International Opera Awards, cementing her place as one of the world’s most exciting young opera stars, and her Rolex watch is forever a reminder of a city that helped propel her career, putting her in a position to contribute the perpetuity of the art which has given her everything.

The Rolex “Perpetual Music” concerts are in keeping with the company’s long-standing commitment to champion those who set the highest standards in the world of music, while also helping this art form to endure as an integral part of everyday life.