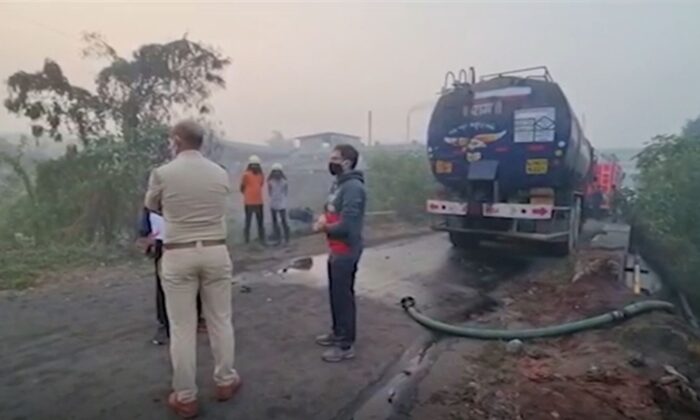 Various of parked industrial tanker, police officers at a gas leak site in Surat, a city in Gujarat state, in western India, on Jan. 6, 2022. (AP/Screenshot via The Epoch Times)

Another 25 people were hospitalized after they inhaled the gas in an industrial complex in Surat, a city in Gujarat state, said police officer Mahesh Patel.

The TimesNow news website reported that the gas leak occurred while the driver was trying to dump some waste in a drain from the parked tanker. Those affected were working or sleeping in a nearby factory.

Other details were not immediately available.

Negligence and lack of safety norms often contribute to such accidents in India.

In 2020, a gas leak in a South Korean-owned chemical factory killed 12 people and sickened hundreds in Vishakhapatnam, a port city in Andhra Pradesh state.

The gas that leaked from the factory was styrene, which is used to make plastic and rubber. Styrene gas is a neurotoxin and can immobilize people within minutes of inhalation.

A committee appointed by India’s top environmental court blamed “gross human failure” and lack of basic safety norms for the gas leak in the factory.