TUDOR is releasing an exclusive new version of its bestselling Black Bay Fifty-Eight model, featuring for the first time a bronze bracelet fitted with a new clasp with rapid adjustment system.

Bronze, an emblematic material in the watchmaking world for its characteristic ageing, now appears as a new colour palette on the iconic timepiece. A rich “bronze-brown” tone decorates the dial and bezel of a divers’ watch whose naval inspiration can be seen in every detail. It is available only in TUDOR boutiques, numbering only fifty throughout the world.

Fitted on a 39 mm bronze case, the choice of material is an aesthetic nod to the bronzes on old ships and other deep-sea diving equipment, and the size follows the proportions of the first TUDOR divers’ watches dating from the second half of the 1950s, particularly the famous 7924 reference or “Big Crown”, the first TUDOR watch to be waterproof to 200 metres (660 ft), presented in 1958 – hence the name “Fifty-Eight”.

The choice of a “living” metal – in this case a high-performance aluminium bronze alloy used particularly in naval engineering for submerged parts required to demonstrate a high level of resistance to corrosion such as propellers, for example – ensures the development of a subtle and unique patina on the case of every watch to match its user’s habits.

In addition to a highly functional appearance, in line with the naval world to which it pays tribute, the Black Bay Bronze presents entirely satin-brushed finishes that guarantee the homogeneous development of this patina.

The combination of a domed dial in matt “brown-bronze”, shaded concentrically from the exterior towards the centre, and a bezel presenting the same gold accents found on the hands and hour markers, completes the face of this model. The overall visual effect is of a rich, patinated object that might have battled the waves of the seven seas for years on its owner’s wrist, and which is “made” for them and their lifestyle. 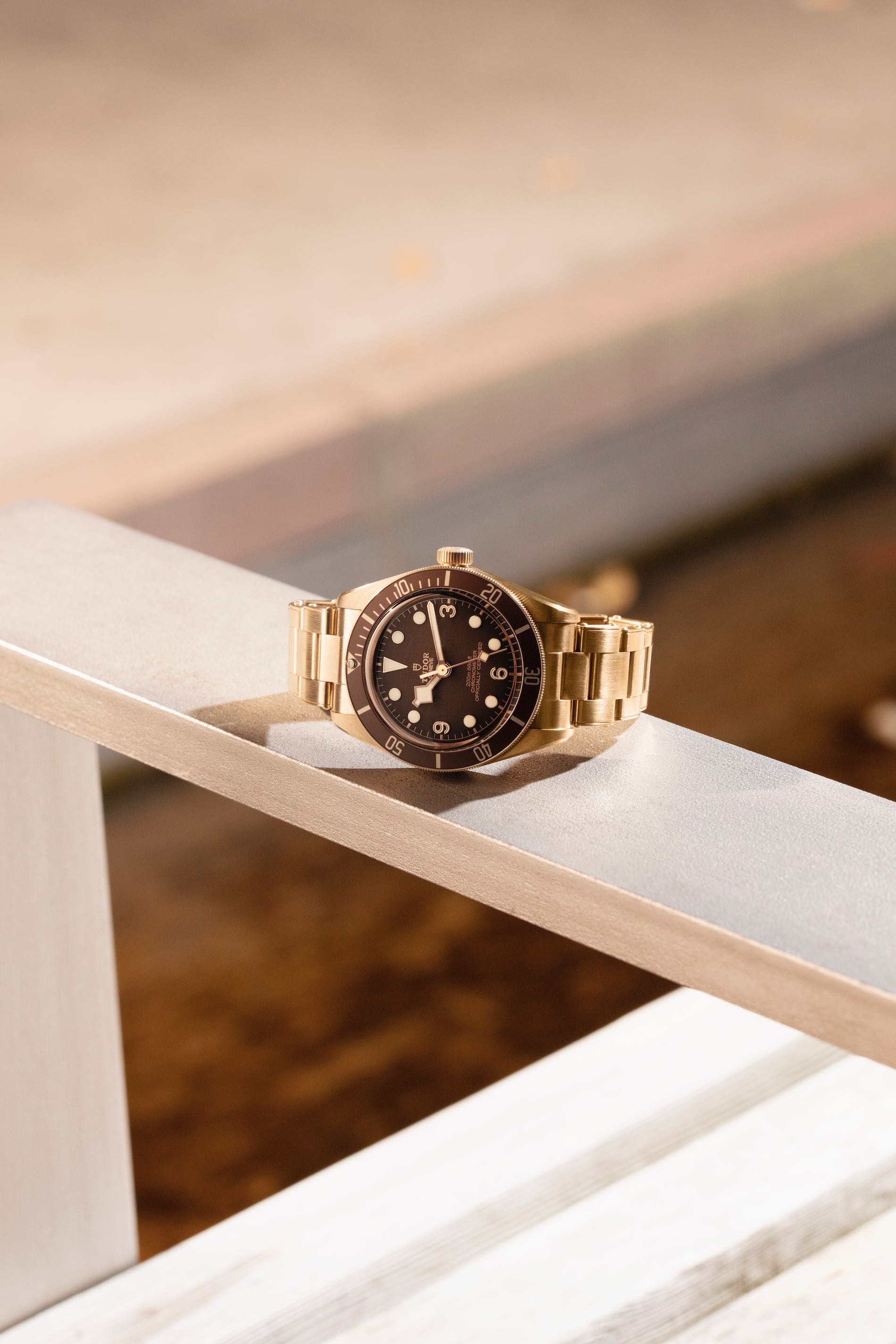 Black Bay Fifty-Eight Bronze model marks the first time that the brand has produced a bracelet entirely from bronze. Its satin-brushed links adopting the style of TUDOR bracelets of the 1950s and ’60s, with rivets, are coordinated with the case and will develop a patina at the same pace.

A new bronze clasp, also satin-brushed, with a redesigned cover and TUDOR “T-fit” rapid adjustment system for the length, completes the total bronze look. Easy to use, requiring no tools and offering 5 positions, this practical system allows wearers of the Black Bay Fifty-Eight Bronze to carry out a fine, instant adjustment on an adjustment window along the entire length of the 8 mm bracelet. 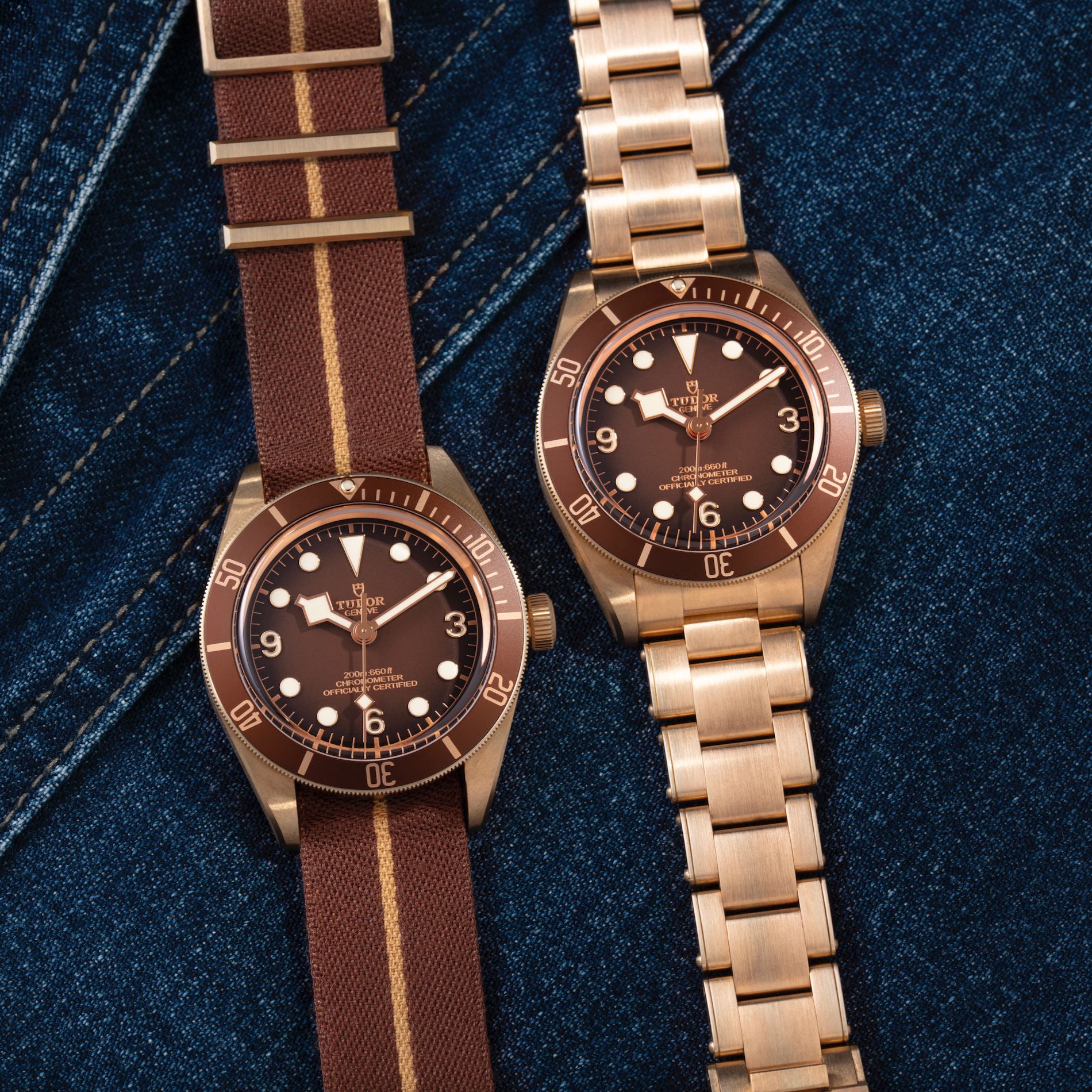 In the spirit of an aesthetic tribute to the brand’s naval heritage, TUDOR presents a free additional strap with its Black Bay Fifty-Eight Bronze model. The brand has identified the historic uses of its watches and reinterpreted them in its latest models. For several decades the French Navy had TUDOR watches delivered without bracelets and then fitted them with their own straps, handmade or otherwise. One of them, found on a period diving watch and conserved in the brand archives, is made of elastic recovered from a French rescue parachute. It is to this ultra-functional relic, recognisable by its central yellow thread, that the “bronze-brown” woven jacquard strap alludes.