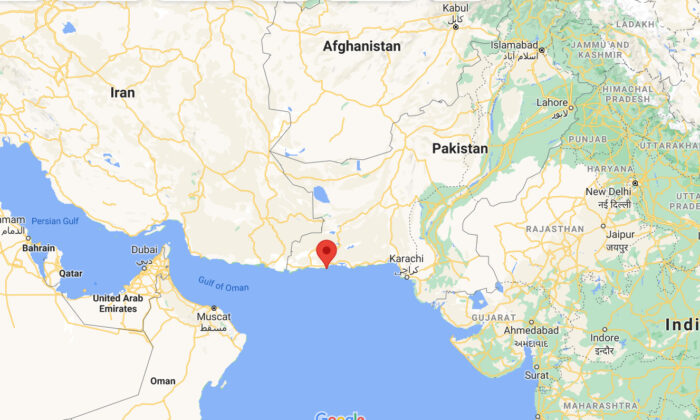 This screenshot shows the location of Pasni, a coastal town in Balochistan province, where a bomb blast killed two soldiers and wounded some more, in Pakistan, on July 14, 2021. (Google Map/Screenshot via The Epoch Times)

QUETTA, Pakistan—Two Pakistani military officials were killed and three wounded when a bomb blew up their vehicle in an area of southwestern Pakistan where separatist insurgents operate, officials said on Thursday.

There was no immediate claim of responsibility for the late Wednesday blast in Pasni, a coastal town in Balochistan province, 126 km (78.3 miles) east of Gwadar port, but separatists insurgents have claimed similar attacks in the area in the past.

Pakistan has accused India of backing the separatists from neighboring Afghanistan and the Pakistani military appeared to allude to Indian involvement in the latest attack.

“Such cowardly acts by inimical elements, backed by hostile intelligence agencies cannot sabotage the hard-earned peace and prosperity in Balochistan,” the military’s information office said in a statement.

The bomb attack in Balochistan came shortly after a blast on a bus in the northwestern Pakistani province of Khyber-Paktunkhwa in which 13 people, including nine Chinese workers and two Pakistani soldiers, were killed.

The separatist insurgents have attacked Chinese projects in energy-rich Balochistan in the past but are not known to operate in Khyber-Paktunkhwa.

The Chinese victims were working on a hydroelectric project.

China said on Thursday it will send a team to Pakistan to help investigate the bus blast after it backed away from an earlier assertion that the explosion was a bomb attack.

Pakistan said a mechanical failure caused a gas leak that led to the explosion.

China is heavily involved in the development of the Gwadar port on the Arabian Sea as part of a $60 billion China-Pakistan Economic Corridor, which is itself part of China’s Belt and Road infrastructure project.