Ukraine is famous for its cultural diversity. This country has also gained global popularity for its diversified cuisine. Ukrainian food is famous everywhere in the world today due to their delicious tastes, traditional styles and of course unique ways to serve to guests. Major ingredients of the diets which Ukrainians prefer are millet, rye and wheat. They have been harvesting such foodstuffs since several centuries. It is worth noting fact that despite being ruled by number of countries including Russia, Poland and Austria, the indigenous inhabitants of Ukraine have kept their culture, traditions and culinary habits alive and intact.

Distinctive feature of the majority Ukrainian cuisine is that their ingredients are usually fried or boiled before stewed or baked. Ukrainians always love to explore different types of cuisines. That is the main reason that they themselves prepare good variety of foods for them and love to serve to their esteemed guests as well. Today’s Ukrainians consider it a matter of pride for them that select few dishes from their cuisine have gone beyond its border to receive international popularity. Check out these 10 best Ukrainian foods. 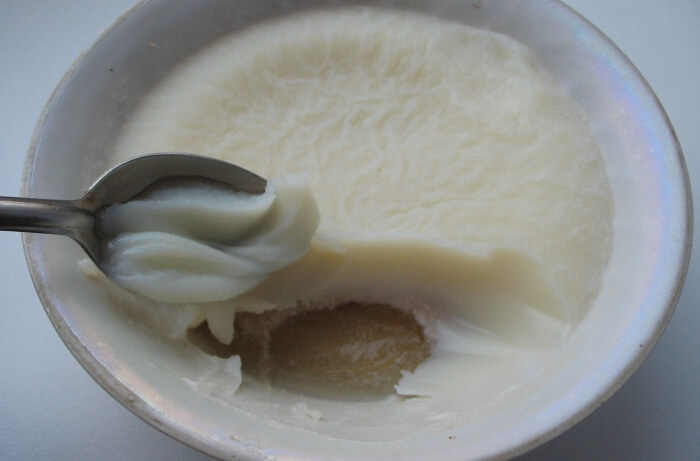 One of the popular appetizers from the Ukrainian cuisine, Kholodet is prepared of either meat or fish as its major ingredient. It is a light and less spicy dish thus it remains most favourite of everybody. With unique taste of garlic and meat, it offers delicious give mouthwatering dining experience.

To prepare Kholodet dish, meat broth is boiled for on slow flame for a longer time period until fully softened. Sometimes, meat broth is mixed with onion, carrots and bay leaves. Seems interesting but it is noticeable that the readiness of this dish is checked through dipping of fingers in it. If fingers come out sticky, the broth is ready so the dish becomes arranged to serve.

Must Read: 8 Restaurants In Hungary That Can Match Any European City For Culinary Travel 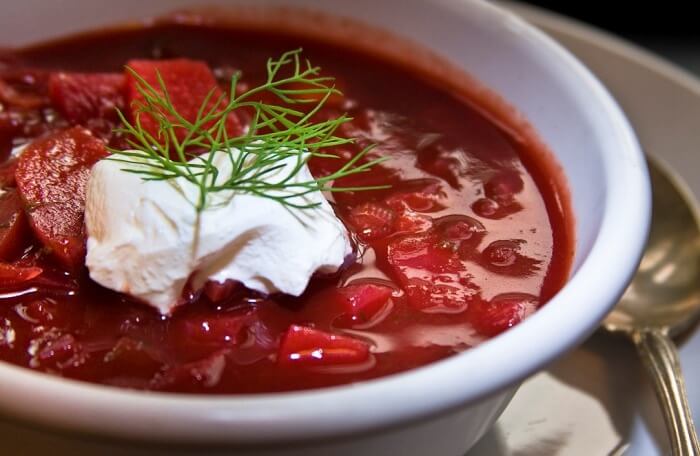 Also called Borscht and Borshch, popular Borscht Ukranian food is a colorful Jewish soup. It is prepared through the assorted vegetables which include beets, carrots, potatoes, cabbage and kidney beans amongst others. In its non-vegetarian version though, meat is added to enhance that flavor and taste.

Although more than 300 types of Borshch are prepared nowadays but Ukrainian Borshch always remains distinct. This unique soup is usually prepared from carrots, potatoes, cabbage, onions, parsley and beets. Distinct dark red color of this dish makes it unique.

Where To Try: Seven Piggies, Cafe Centaur, The Most Expensive Galiciam Restaurant, Galushko 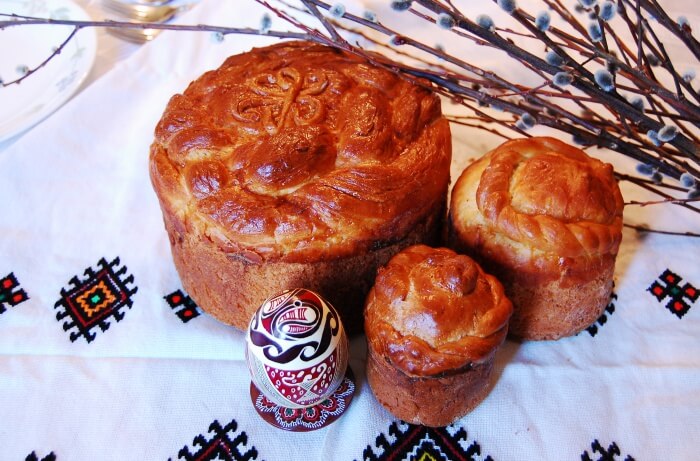 Paska is famous as Ukrainian Easter bread. This traditional cake recipe is baked with the eggs besides flavoring agents and alcohol. Whether Christmas or some other holiday, this cake remains perfect choice among the families. In order to add some religious flavor in it, it is often decorated with religious symbols.

Loved by both adults and children, this delicious bread is the most appropriate companion of grand meat sausages. In addition, it remains a popular give-away in the Ukraine societies during the Easter family visits. This Ukrainian food is also frequently available in Poland with the local metaphor Babka there. In Ukraine, the process of making this bread starts fairly early in the morning on the Good Friday occasion. People get to sink their teeth into the first slice on Easter morning.

Where To Try: Kryivka, Odessa

Suggested Read: 6 Museums In Italy Across 6 Cities. Which One Will You Choose For Your European Adventure? 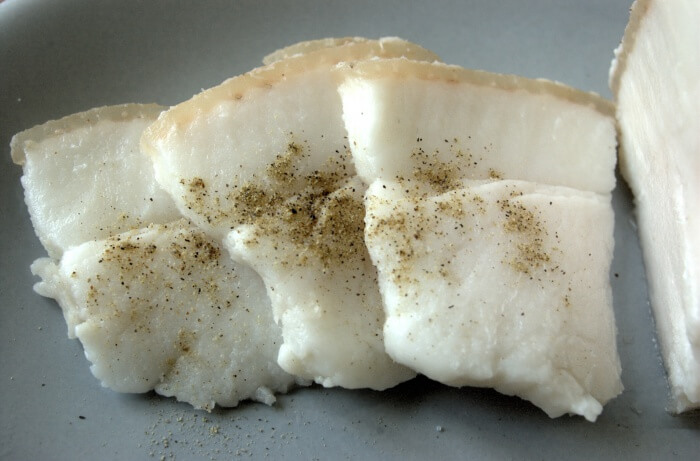 If you are looking for best Ukrainian breakfast foods, then without a doubt start relying on Salo with garlic. Also known as the National Ukrainian dish, Salo is a white pork fat. Due to high energy contents, this dish has become an integral part of diet in the Ukrainian cuisine.

Also working as popular Ukrainian snacks, Salo can be best preserved for several days even without refrigerating, if salted or smoked. Besides Ukraine, this dish is equally popular in its neighboring countries Belarus and Russia. Russian Solos are though slightly different from traditional Ukrainian Solos. Russian version contains bits of meat unlike traditional Ukrainian Salos prepared without use meat. Rather, a white layer of fat is used for that purpose.

Suggested Read: Shopping In Czech Republic: For Adding More Charm To Your Wardrobe With A European Touch 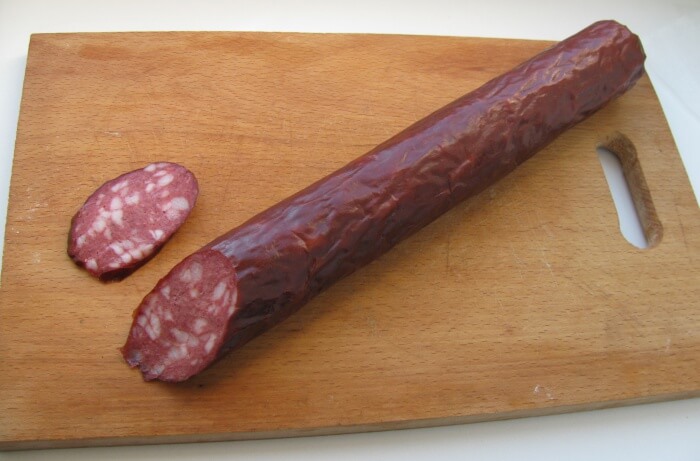 Whether rural or urban Ukrainian families, they love to eat aromatic home-made Ukrainian sausages or Kovbasa—as famously denoted it. Thin casings are stuffed with ground meats, fats and spices to make it delicious. A fully cooked product, it is served either hot or cold. Whether you are in Ukraine or Poland, you will find the Kovbasa/Kobasa available for breakfast, lunch and/or dinner.

Kovbasa is a generic word in Ukraine denoting any sausage, while kiełbasa is the generic word for sausage in Polish language. This simple yet delicious sausage is prepared from the combination of pork or beef and or peperivka with spicy vodka. Its taste and flavor improves with the time. This dish has also attained popularity in the US as well.

Where To Try: Baczewski, Ukranian Courtyard 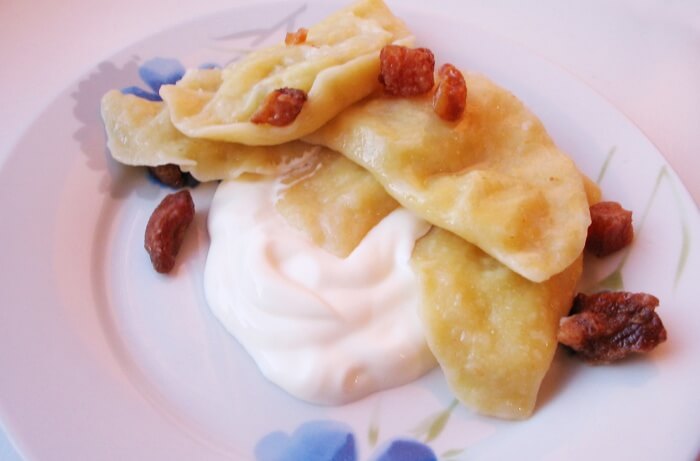 It is impossible to imagine Ukrainian food without Varenyky. Prepared from boiled dough with the diverse fillings like meat, mushrooms, vegetables, fruits and cheese et al, Varenyky isn’t a festive dish. Its aroma and taste literally mesmerizes people. It is taken either as main course or the dessert according to eaters’ preferences. It is also known as pierogi Ukranian food in some locations.

Like rest food items, Vareniki has also become popular worldwide with different names, forms and fillings. For example, in Russia it is called “Pelmeni” with meat stuffing. Locals in Ukraine also prefer sweet Varenyky but sour cherry stuffed dish remains common. A must have food in Ukraine; its taste and aroma literally makes it a mandatory for all occasions.

Suggested Read: 20 Best Places To Spend Christmas In Europe 2022: Where Festivities Breathe Magic Into The Air! 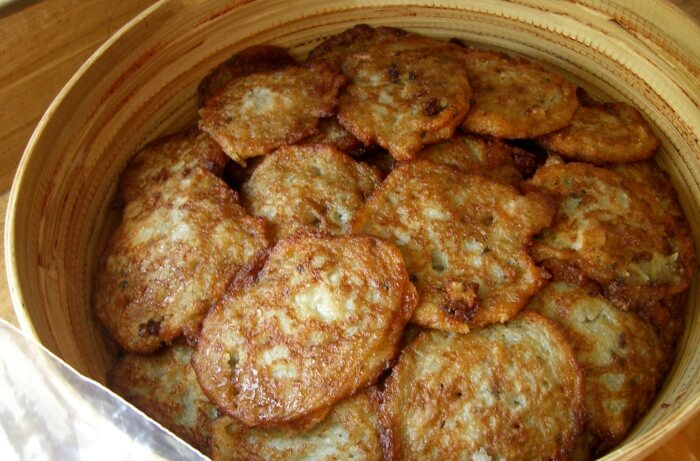 Potato pancakes are also known as Deruny in Ukraine. This popular dish is believed to have been invented in the neighboring Belarus and local Ukrainians love to eat it. Prepared from finely-shredded raw potatoes mixed with eggs and flour, they are scrumptious pancakes considered an ultimate Ukrainian breakfast foods’ choice.

Deruny is also taken with tea. It is now available worldwide with different names. This classic recipe is probably part of the Ukrainian cuisine since several centuries. This recipe stood the test of time to remain popular due to its incredible taste and preference by everybody, irrespective of age groups. Taking this recipe with sausage makes it awesome to enjoy.

Where To Try: Facet, Pervak 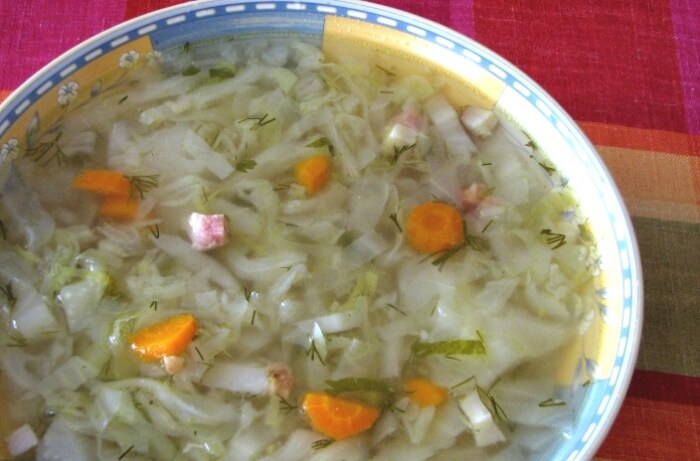 Kapusniak is a traditional Ukrainian soup that remains popular in every household during the winter season. It holds second place in popularity after Borscht due to its density, high nutritional value and rich taste. This recipe was named after its basic ingredient, sauerkraut, also pronounced “kapusta” in Ukrainian language. In order to add special flavor and sour taste, pickled vegetables are included in this soup.

Main ingredients of this soup are broth, cabbage and cereals. As they are easily available round the year, one can have them to prepare this dish throughout the year. This soup used to be popular among farmers earlier. It would also remain famous on weddings and funerals. Sooner or later this recipe became common and popular in all Ukrainian households.

Where To Try: Pervak, Zest 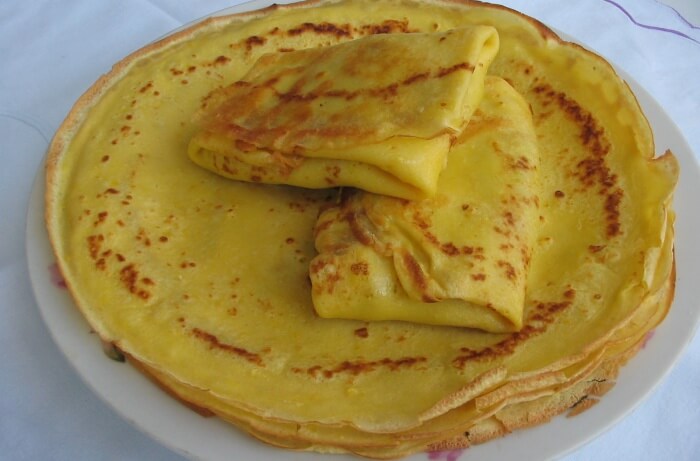 Now popular worldwide, same principle is used to prepare Nalysnyky everywhere with the main ingredients except some difference for batter uses and stuffing etc. It is flavored with a touch of dill, baked in ample amount of butter and topped off with caviar. Food lovers enjoy this dish on their tables.

Where To Try: Shumka Ukranian Foods 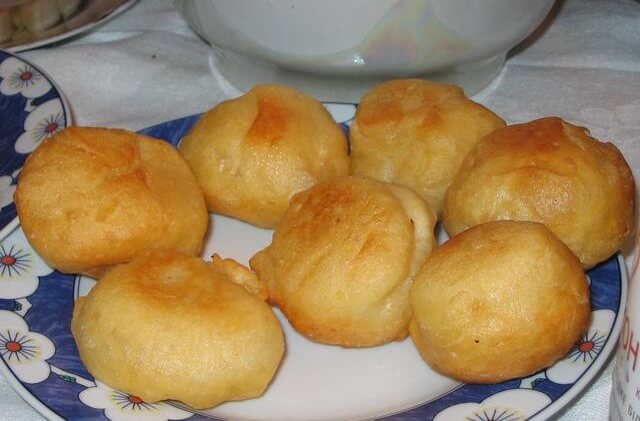 Considered a popular sweet dish in Ukraine, Pampushky is served with powdered sugar and sour cream at its top. It is enjoyed as a delicious and tasty light food with a cup of tea. Food lovers are can explore it and many other popular Ukrainian snacks to desserts during their tours.

Where To Try: Seven Piggies, Musafir 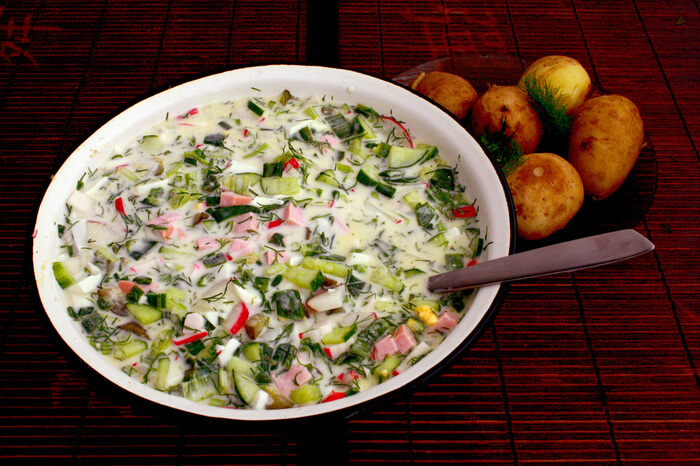 A famous and frequently cooked favorite amongst the locals, Okroshka is a soup that is prepared in summers. A savior from the sticky weather, this soup is extremely scrumptious and refreshing. The ingredients including sausages, cucumbers, grees, carrots, and radishes are diced in larger pieces in order to give this soup a perfect texture. 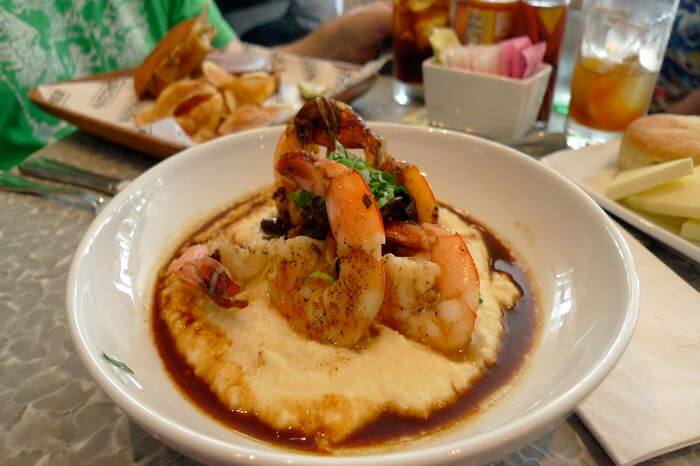 Once a food associated with poverty, Banush has emerged as a favorite staple dish amongst some of the best restaurants across the Carpathians. Western Ukraine may have a lot of different recipes for this one dish but traditionally Barush is prepared of corn grits, fried pork fat and cheese. It is cooked over a fire to get a smokey flavor. To make the taste richer, some recipes call for mushrooms in the porridge.

Where To Try: Seven Piggies

Further Read: 10 Churches In Netherlands Which Offer A Glimpse Of The Ancient Structures Of Europe!

Whether you want to know about Ukrainian food culture, or yearn for a plateful of yummy Ukrainian breakfast foods, plan a trip to this country for memorable dining experience. Enjoy Ukrainian culinary with family by tasting ample varieties this country offers. Your satiating crave for the diverse cuisines end here.

Disclaimer: TravelTriangle claims no credit for images featured on our blog site unless otherwise noted. All visual content is copyrighted to its respectful owners. We try to link back to original sources whenever possible. If you own the rights to any of the images, and do not wish them to appear on TravelTriangle, please contact us and they will be promptly removed. We believe in providing proper attribution to the original author, artist or photographer.

Please Note: Any information published by TravelTriangle in any form of content is not intended to be a substitute for any kind of medical advice, and one must not take any action before consulting a professional medical expert of their own choice.

Which is the most popular food in Ukraine?

Varenyky is the most popular food in Ukraine.

What do people drink in Ukraine?

Horilka is a Ukranian pepper vodka and one of the most common beverages amongst the locals.

What are the 12 Ukrainian Christmas dishes?

Looking To Book An International Holiday?

The post Ukrainian Food: 12 Popular Mouthwatering Dishes You Must Try appeared first on .