WASHINGTON ― The U.S. will send Ukraine another $1 billion in weapons to fight Russia, including Harpoon anti-ship launchers for the first time, and more ammunition for high-tech, medium-range rocket launchers, the Biden administration announced Wednesday.

Amid calls from Washington and Kyiv for more and faster shipments of weapons for Ukrainian forces, Austin and Gen. Mark Milley, the chairman of the U.S. Joint Chiefs of Staff, acknowledged Russia’s military superiority and defended U.S. and allied efforts to even the odds. With Ukrainian forces facing a tough fight for Eastern Ukraine, the U.S. has been sending arms meant to take out positions from which Russian forces launch brutal artillery barrages.

The new U.S. aid uses a combination of $350 million in presidential authority to draw equipment from U.S. military stocks and $650 million in the separate Ukraine Security Assistance Initiative. Defense officials say the Pentagon plans to use USAI to buy truck-mounted Harpoon launchers, which the U.S. doesn’t operate, but the missiles themselves would come from allies and partners. Denmark previously committed to providing Harpoons to Ukraine.

Austin hosted a meeting of about 50 nations at NATO headquarters in Brussels to discuss the weapons deliveries to the invaded nation. Afterward, he highlighted three multiple-launch rocket systems and GMLRS ammunition for Ukraine from Germany, Mi-series helicopters and rockets from Slovakia and artillery donations from Canada, Poland and the Netherlands.

Though Russia has more artillery, it’s using it for mass fires and isn’t necessarily hitting military targets, as Ukrainian forces are, Milley said. He argued Russia’s slow-moving gains in the nearly four-month war don’t mean its victory in Eastern Ukraine is inevitable.

“War takes many, many turns, so I wouldn’t say it’s an inevitability, but I would say the numbers do favor the Russians. In terms of artillery, they do outnumber, they outgun and outrange … and they do have enough forces,” Milley said. “But the Russians have run into a lot of problems. They’ve got command and control issues, logistics issues, morale issues and leadership issues.”

The administration pledged June 1 it would send the HIMARS, with GMLRS rockets that have a range of about 40 miles. Milley said Wednesday that by the end of the month, the U.S. will have supplied the systems and trained Ukrainian crews to operate and maintain them.

Within weeks, Ukrainian forces will have 10 multiple launch rocket systems from U.S., UK, and Germany, with more than 100 rounds of ammunition. “They’re top notch gunners, and the effect that they’re achieving on the battlefield right now with the [M777s] has been very, very good, very effective ― and we expect the same out of the HIMARS,” Milley said.

U.S. President Joe Biden announced the aid Wednesday after he held a call with Ukrainian President Volodymyr Zelenskyy. The U.S. is also sending $225 million in humanitarian assistance, including medical supplies, food, shelter, and cash for families to purchase essential items. 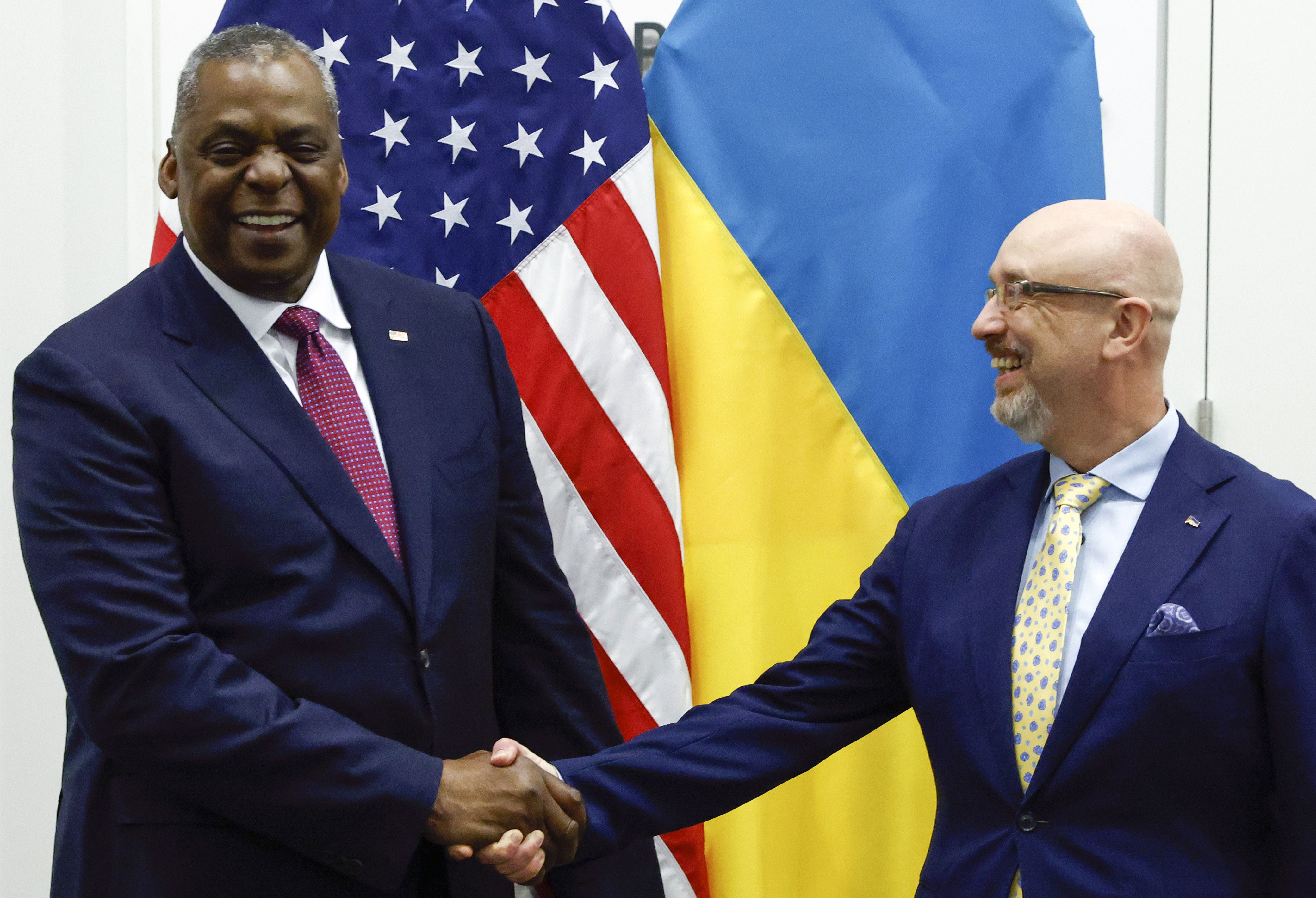 Noting “painful” losses in Severodonetsk, which he said would be the key to controlling the Donbas region, Zelenskyy pleaded anew with the West for more and faster deliveries of arms in a statement Tuesday. Ukraine needs “modern anti-missile weapons,” he said, adding that its air defense units had shot down “some” Russian missiles fired at Ukrainian cities.

“Even though Russia has fewer and fewer modern missiles with each passing day, Ukraine’s need for such systems remains,” Zelenskyy said

Republicans and Democrats in Congress have criticized the Biden administration directly in recent days, urging it to do more.

House Armed Services Committee Chairman Adam Smith, D-Wash., said he’s told the administration “near constantly” that it’s been overly timid about sending Ukraine sophisticated systems like long-range artillery and the Grey Eagle, a reusable flying drone with a 200-mile range that is used by the U.S. Army.

“I think we need to be giving more sophisticated systems, particularly when it comes to drones and long-range artillery,” Smith said Wednesday at a wide-ranging reporters’ roundtable ahead of the administration’s announcement. “I think we ought to get them that equipment more quickly.”

The administration’s been “too cautious” as it considers the risks of exposing U.S. technology and how long it will take to train Ukrainian troops, Smith added.

The U.S. has sent Ukrainian forces the Puma flying drone and Switchblade loitering munition as well as the Phoenix Ghost, a new drone developed by the U.S. Air Force.

Ukraine promised the U.S. it would not strike deep into Russian territory as part of the deal to acquire HIMARS ― a step meant to avoid escalating the war.

But Smith said he disagrees with Biden’s decision not to supply Ukraine with longer-range rockets that can reach into Russia and that the U.S. should be sending even more artillery and ammunition to help Ukraine stand up to Russia’s superior weaponry.

“Quantity is a huge part of the issue right now,” Smith said.

Amid such criticism, Pentagon policy chief Colin Kahl said Tuesday the U.S. intends to continue to send Ukraine what it needs and that the powerful, precision GMLRS ammunition allows Ukrainian forces to get more impact for a single shot.

“Think of this more like the effect of an airstrike than launching off full salvos,” Kahl said at a Center for a New American Security event. “In other words, you can do a lot for a little or you don’t need a lot to have a significant effect.”

Overall, the U.S. has committed about $4.6 billion in security assistance to Ukraine since the beginning of the Biden administration, including $3.9 billion since Russia invaded.

The Pentagon has pivoted to supplying Ukraine with western weapons like the M777 howitzer or truck-mounted HIMARS as stocks from former Warsaw Pact countries that match Ukraine’s Soviet-era weapons have run out, Kahl said.

“Our sense is that he has not changed his overall objectives,” Kahl said. “He has designs on a significant portion of Ukraine, if not the whole country. That said, I do not think he can achieve those objectives.”