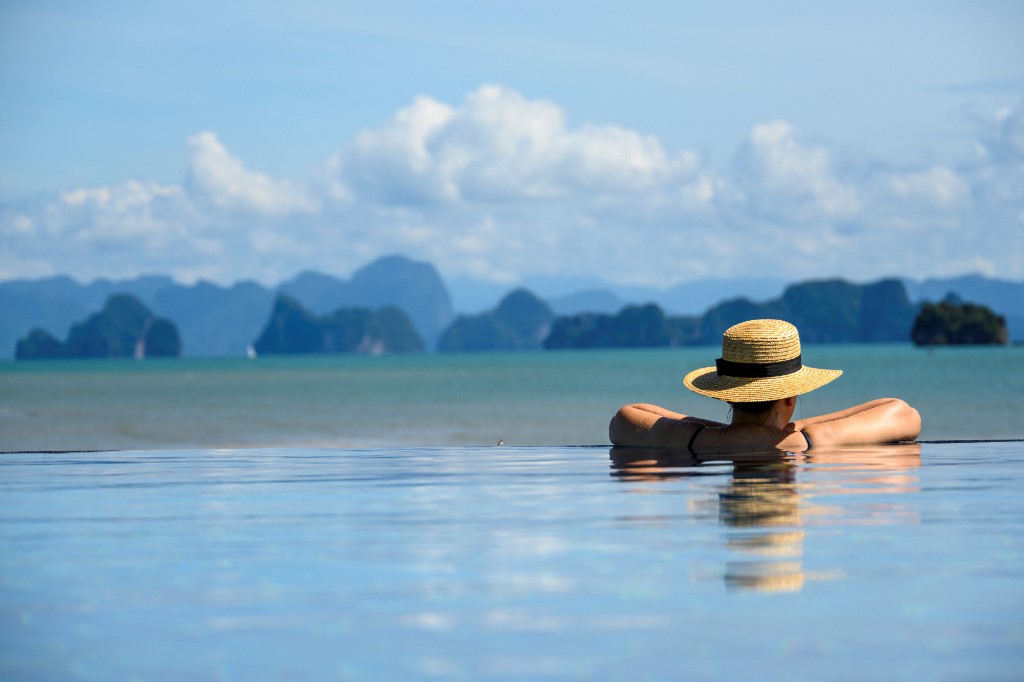 A tourist enjoys the view of the Hong islands from the infinity pool of a resort on Koh Yao Yai island in the Andaman Sea. (Photo by Mladen ANTONOV / AFP)

Although the third wave of COVID-19 has hit Thailand hard, key decision-makers are still keen to launch the “Phuket Sandbox” on July 1. The sandbox will trial Thailand’s reopening by allowing inoculated foreigners to visit Phuket without having to quarantine.

Crucial to its success, however, is whether the government can deliver enough vaccine to achieve herd immunity in the population of the province and if the private sector will deliver solid support.

“We have not canceled or changed the Phuket Sandbox plan,” Commerce Minister Jurin Laksanawisit said on Sunday. “Vaccinations are being urgently rolled out in Phuket.”

Jurin, who doubles as deputy PM, was speaking just as Thailand’s daily deaths from COVID-19 rose into two figures for the first time since the epidemic began last year.

On Sunday, authorities confirmed 2,483 new infections and 11 deaths, a caseload that shows the third wave is nowhere close to subsiding.

Phuriwat Limthavonrus, assistant president of the Tourism Council of Thailand, believes the third wave is so serious that nobody wants to travel anymore. At this point, tourism operators are ready to welcome any measures, even lockdown and curfew, if they can help control the outbreak.

Will the Phuket opening go ahead?

With the Thai economy heavily reliant on international tourists, the government is desperate for the tourism industry to make a quick recovery from the impact of COVID-19. Hence the Phuket Sandbox initiative.

Under the plan, the world-famous paradise island will have 70 percent of its population – with the help of more than 900,000 doses of vaccine – inoculated in a bid to achieve herd immunity. Inoculated foreigners will then be allowed to enter the tropical paradise without having to first quarantine for 14 days.

If the Phuket Sandbox is implemented as scheduled, the Thai tourism industry should be able to generate dozens of billions of baht in the third quarter this year.

Though Phuriwat doubts the sandbox will actually be implemented, Jurin insists it will go ahead as planned as the government is serious about promoting the Phuket trial.

“We will complete the vaccination plan for Phuket before the end of June. It will cover not only local citizens but also foreign migrant workers,” he said.

Vaccination in Phuket is making good progress with 100,000 doses already been administered, he added.

Sanan Angubolkul, Thai Chamber of Commerce chairman, said its Phuket chapter is monitoring the situation closely. Despite the fast-spreading third wave, there is still hope that the Public Health Ministry can secure enough doses of COVID-19 vaccine in time for the Phuket Sandbox to go ahead as planned.

However, as well as a proper supply of vaccines, solid support from the private sector is also necessary for the plan to take off, he added.

“Private firms may have to provide staff and venues for vaccination. If the state cannot provide funding in time, [private companies] may have to advance the money first,” he pointed out. “It may be necessary to keep the vaccination drive running 24 hours with the help of retired nurses or medical students.”

Sanan said Phuket’s populace had agreed to take the vaccine, so stakeholders should now join forces in getting the sandbox up and running.

Tourism and Sports Minister Phiphat Ratchakitprakarn says that the government has already procured vaccines for the Phuket initiative and hopes to launch similar schemes in holiday destinations such as Krabi, Phang Nga, Koh Samui, Pattaya and Chiang Mai.

One young businessman in Phuket who has already received both Sinovac jabs believes the Phuket Sandbox will definitely be implemented.

“Though it may just be delayed by a month or two,” he said.

Prime Minister Prayut Chan-o-cha and his government are suffering a barrage of attacks from critics and political rivals as Thailand is hit by a third wave of COVID-19 infections. Some observers are warning of a popular uprising if the government fails to tackle this fresh outbreak successfully.